It’s funny how these things come about as all 3 riders who entered the 12 hour this Year didn’t have it on their radar until very recently.  Jim’s amazing 24 hour epic was definitely the catalyst, so thanks for that Jim (not)!  I asked Jim a while ago if he was going to make the most of his hard earned mega miles training this year by doing the 12 hour and whilst he was milling it over I said, “I’ll do it if you do it” (that backfired didn’t it)?  We then agreed that it would be great if we could get a team of 3 as it’s been many years since that last happened in the 12 in our club.  So I used my powers of persuasion to pressgang Alistair and Chris Gilbertson.  Chris has ridden a few before so knew what to expect, so he politely declined.  I re-assured Al that a 12 hour is just a long day out on a bike at a brisk pace and nothing like as hard as a 100, which you have to race hard.  He was up for it …. success!

We then needed a goal to ensure that we all got around at a respectable pace so I dug out the record books and sure enough the 12 hour team record set in 1982 was just about achievable at a push at 702.44 miles (remember that number, especially the decimals).  I should point out that the quickest of the 3 counters on that day was Alan Heggs who was the local hot shot for several years and he won the event with 260.245 miles with Jimmy feeding him.  The other two were Trevor Williams (no relation but a very close mate) 230.224 and Frank Riley 211.771.  I should also point out that Alan was in his early 20’s, Trevor in his early 30’s and Frank in his early 40’s.  Jim, Al and I are 58,48 & 52 although I know we don’t look it!  So with their combined age of about 110, we had about 50 years on them. 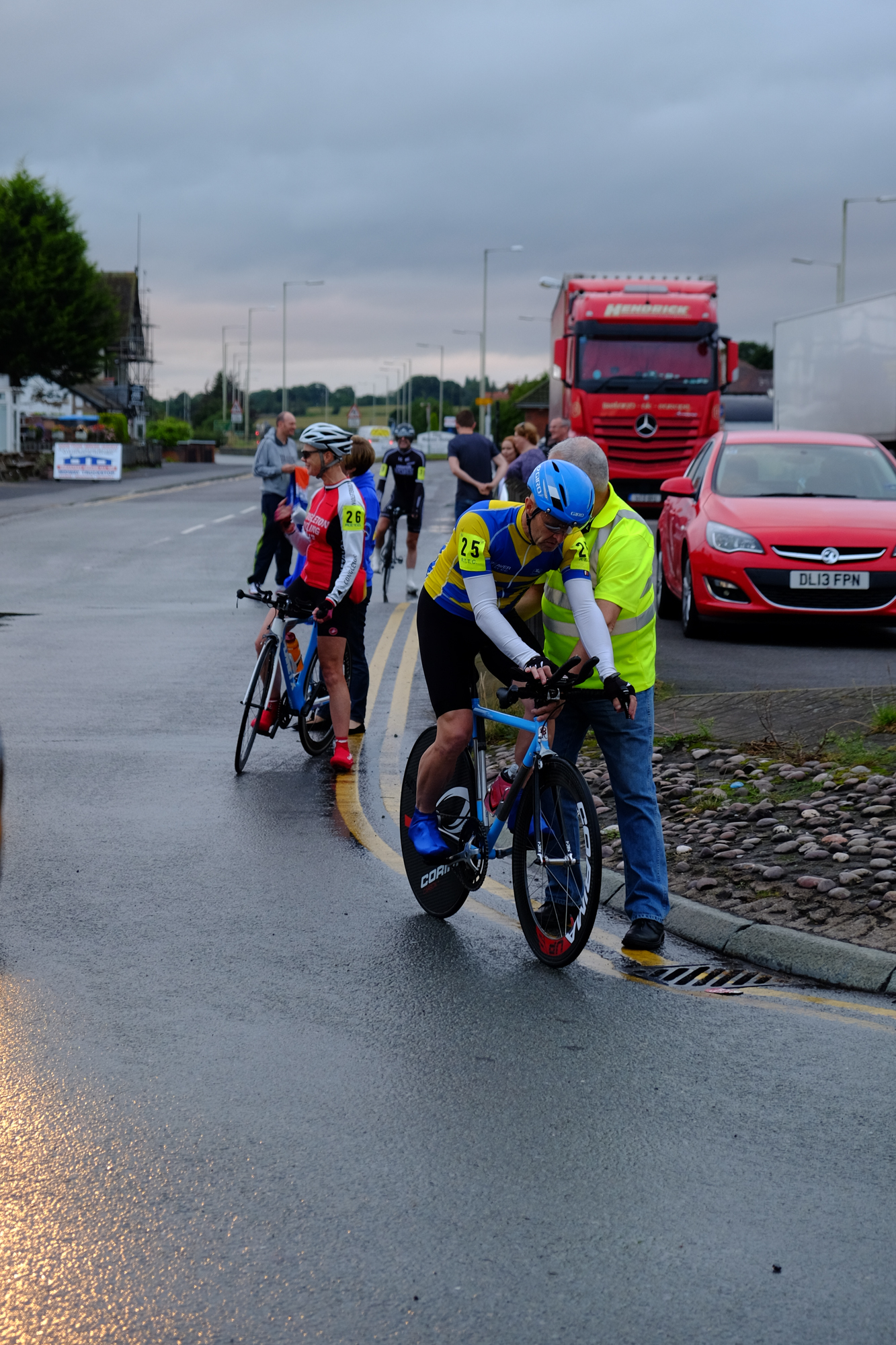 The start. First WVCC rider off..

I was off at 06:25 with Jim 14 minutes behind me and Al 8 minutes behind him.  In the 12 hour the riders do a series of legs and then finish up on a 12.5 mile long finishing circuit with timekeepers every 1.5 miles.  Slower riders miss out legs and at the end the timekeepers scratch their heads and work out the actual distance for each rider.  This year 3 of the legs were out of action due to roadworks, so the revised course did a morning 20.5 mile loop 3.5 times max, followed by an 17.55 mile loop 6 times max and then back to the finishing circuit at Prees.  The problem with loops is that you can go for lengthy periods without seeing another rider as you don’t cross on the road.  This can be a challenge in what is already a 75% mental game.  On the plus side the revised course was mostly flat compared to the usual route (especially good if your riding 90″ fixed – 58 x 18).

My plan was to average 22 mph at 100 miles and then hang on after that trying to keep over 20 mph most of the time.  At the end of lap 1 at 20.5 miles my average was 22.9 mph and I knew that this would be as good as it would get and I throttled down ever so slightly and it steadily dropped by 0.1 mph for each of the following laps so I hit the second Espley circuit at 22.5 mph average.  This loop was tough as the wind had picked up and the loop starts with a steady climb of about 1 mile straight into the wind.  Also the back of the loop is rough surfaced B-roads with a short but very sharp climb of about 200 yards half way around, just to give you a swift kick in the head while you are down.  I hit 100 miles in 4:32:20 so 22.1 mph so more or less on track.  This was followed at 130 miles with 6hrs 01 minute on the clock.  I remember thinking at the time that my PB of 262 miles was very safe as the second half of a 12 hour is always quite a bit slower than the first and I was already doing a slightly slower average at the half way point.  I should add that the eventual winner Victor Chetta had already caught me for 30 minutes at 90 miles so he must have beaten 4 hours at 100 miles which is just ridiculous. 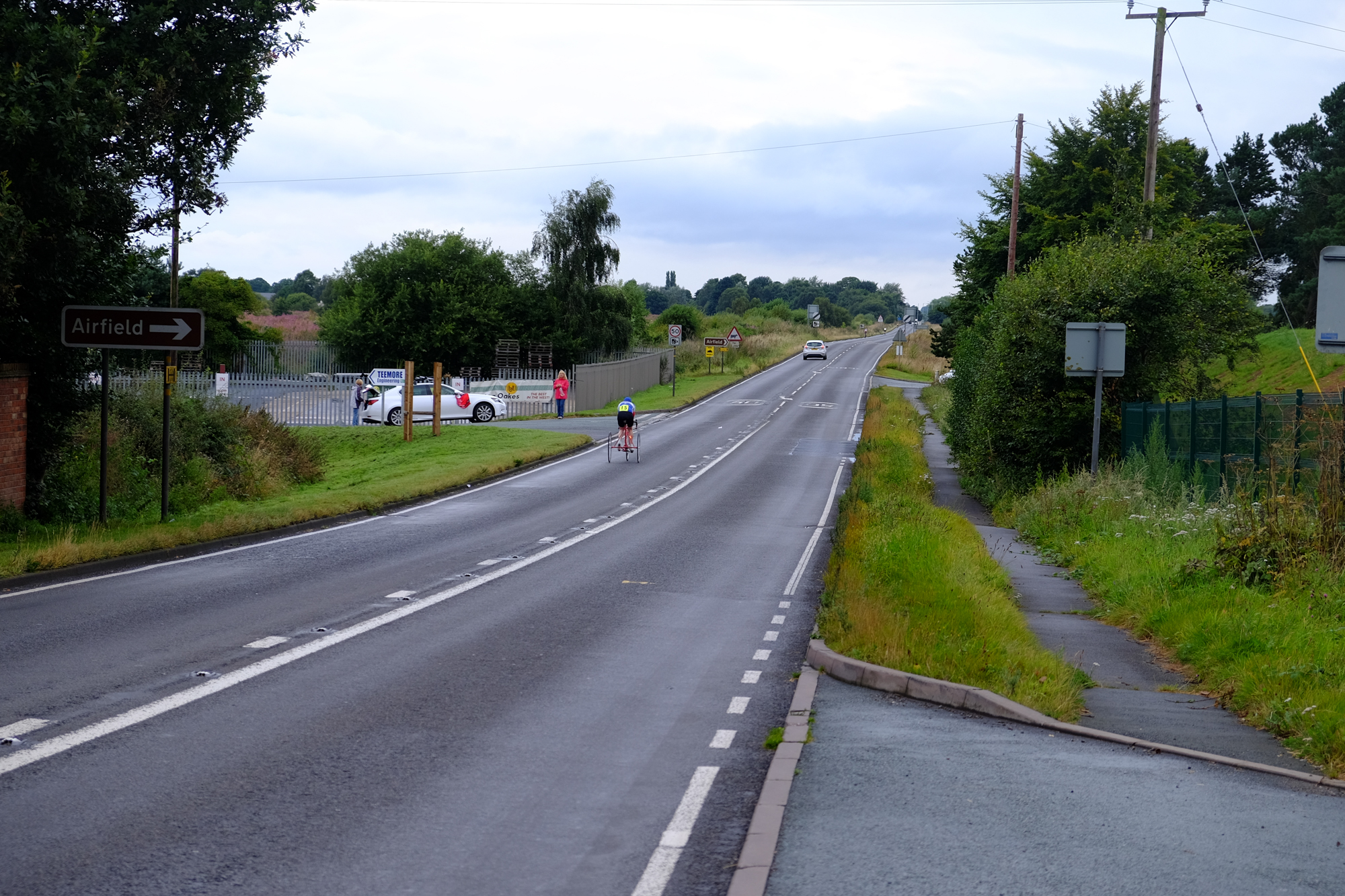 Riding back to Prees.

As we were on a loop I eventually caught Jimmy and then Alistair at some point around half distance and I went past Al up the horrible climb from Espley.  I reminded him that 12 hours is much easier than 100 miles but for some reason he didn’t laugh.  Some people can be so touchy!  Al had caught Jim at this point but we were all finding it a bit grippy.  I was convinced that they would send me back to the finish circuit after lap 5 but to my horror I had to do yet another lap of that tortuous circuit.  Jim and Al got away with it but I had a lonely final loop before experiencing the relief of finally heading back to Prees. 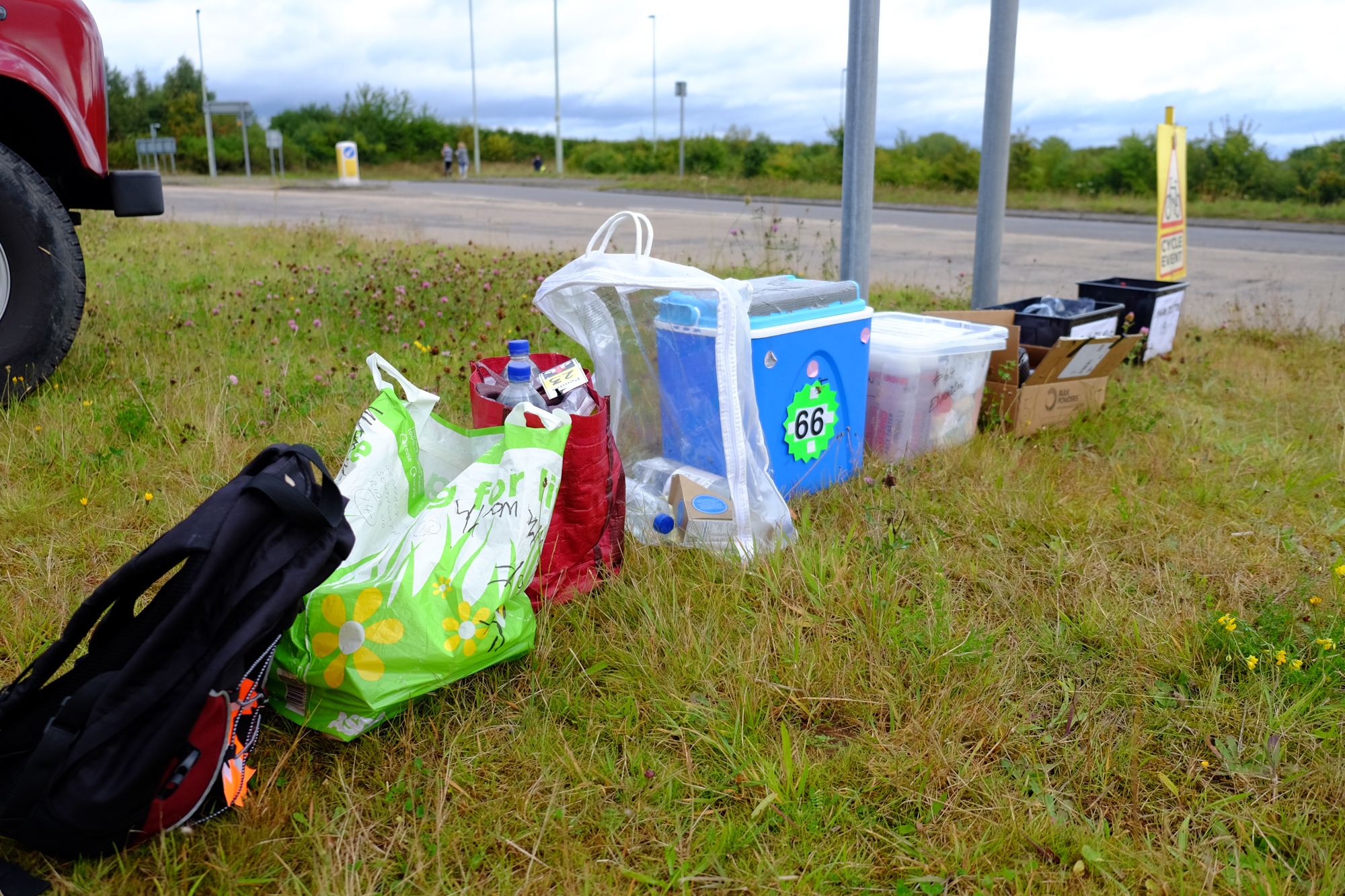 Some self supported. Now that’s even tougher…

At this point I should say a big thank you to the helpers.  Not just the massive group of volunteers that marshall for hours, sit on corners timekeeping and the organisers, but more personally to Ady and Caroline who helped me, Chris and Syd who helped Al and Graham who helped Jimmy.  I hope you enjoyed watching the race unfold and your support was the only thing that got us through it. 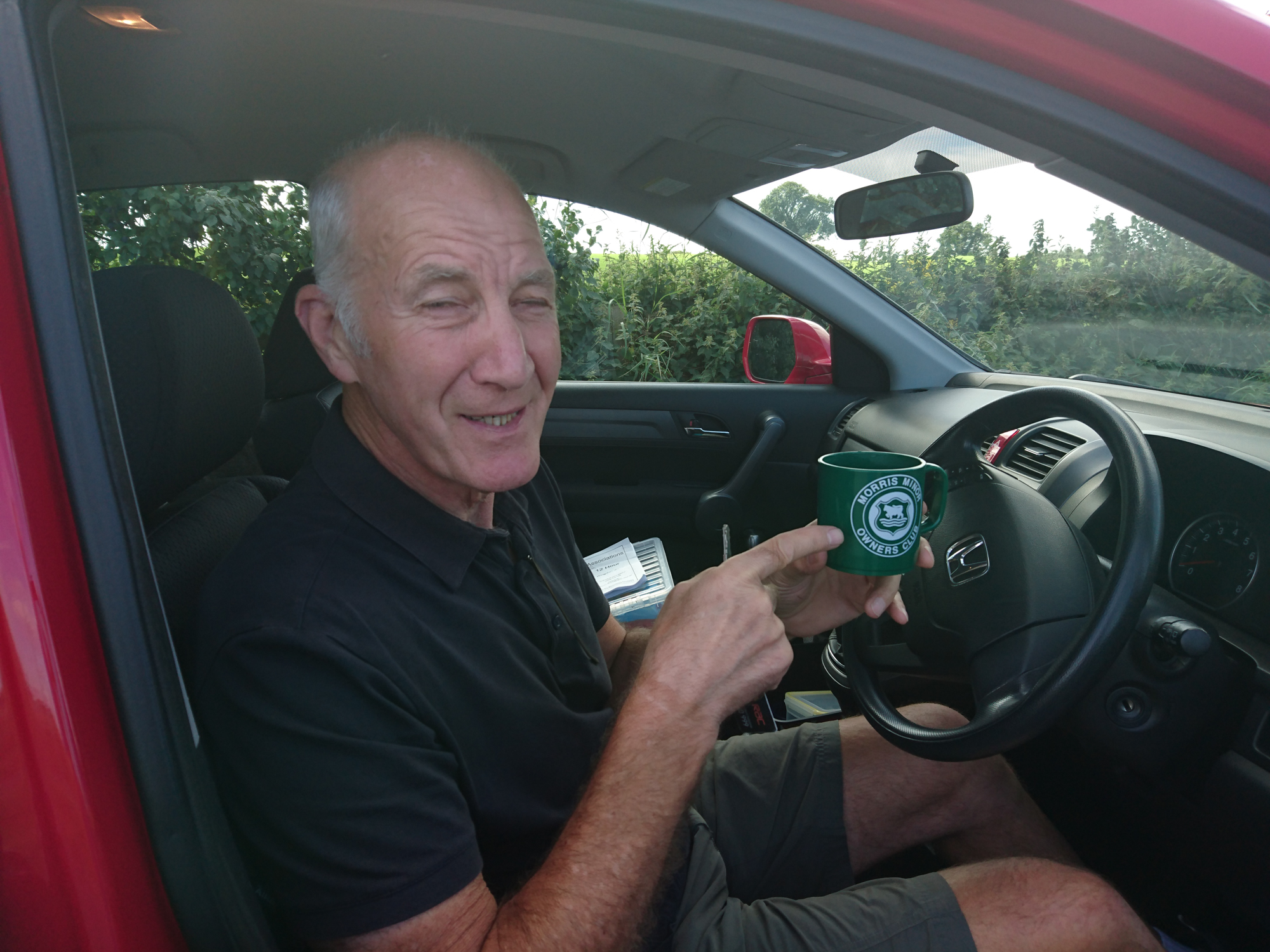 Syd takes time out from supporting Jim to show us his Morris Minor Mug. 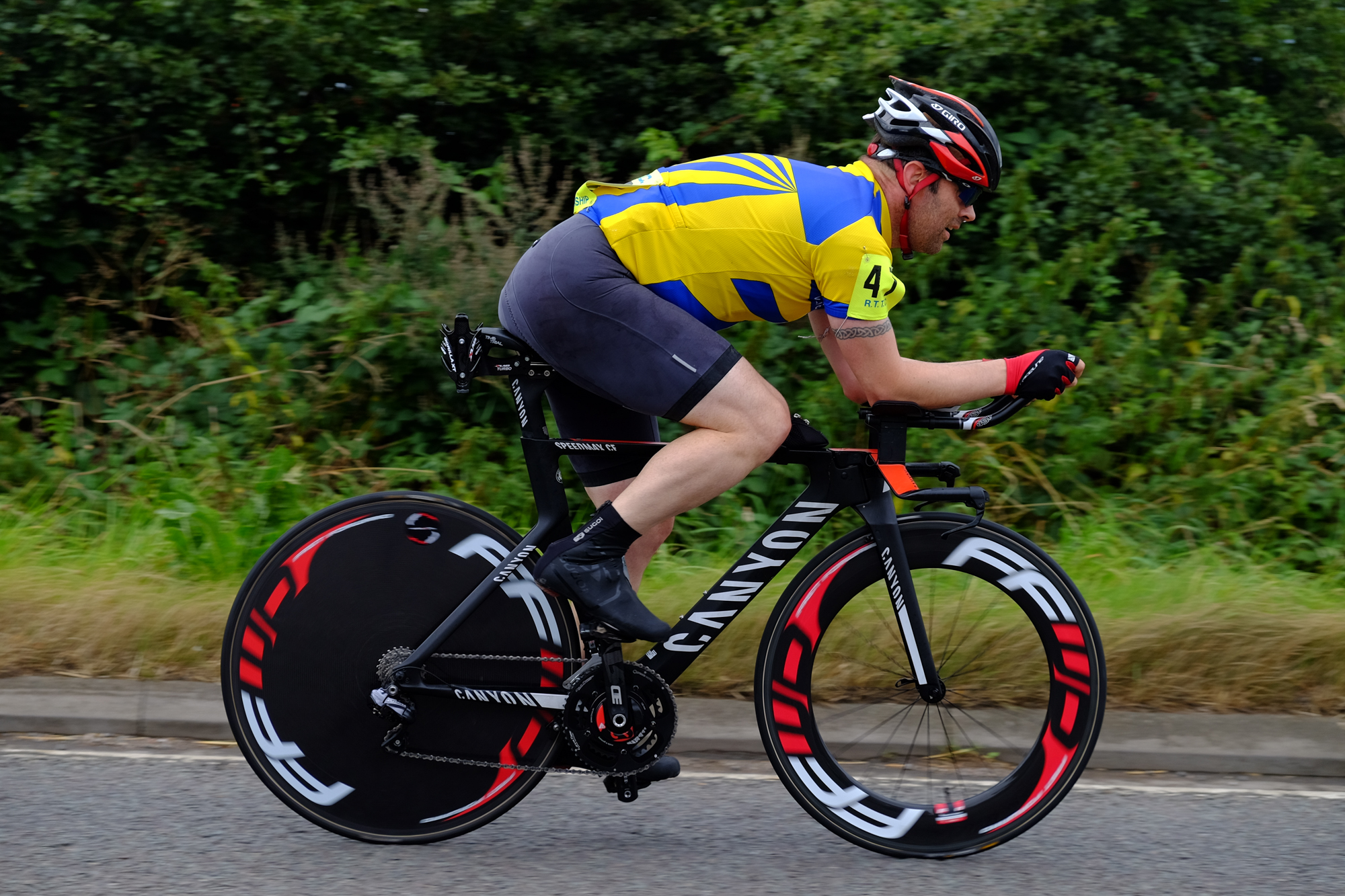 Alistair looking solid, but feeling bad following his raisin spill incident. You’ll have to ask him about it..

I find that I always pick up on the finish circuit so I did a quick calculation in my head and decided that if I could stop my average from dropping (as it had done to that point) I would beat what I thought was my 3rd best distance ever of 247.24 miles set in 1983 at the age of 19.  You need a target to maintain focus and this one was tough but achievable.  My average entering the circuit was 20.6mph.  I’d ridden conservatively to this point knowing that I have no long miles in my legs this Year, but I knew that I could now push it ever so slightly to stop the decline.  Just 2.5 hours of pain to go!  Unbeknown to me Al and Jim also had a motivator as Jimmy was pulling back Al who for some reason was feeling a little jaded at this point.  Jim had a bad back from about 2 hours in and it had been steadily getting worse.  He was ignoring the pain and grinding out the miles and now he had to push just that little bit harder.  Al must have thought, “I’ve gained this time over the past 10 hours or so and I’m not throwing the towel in now.  So the team all had personal challenges driving them on and to take records mind games make all of the difference. 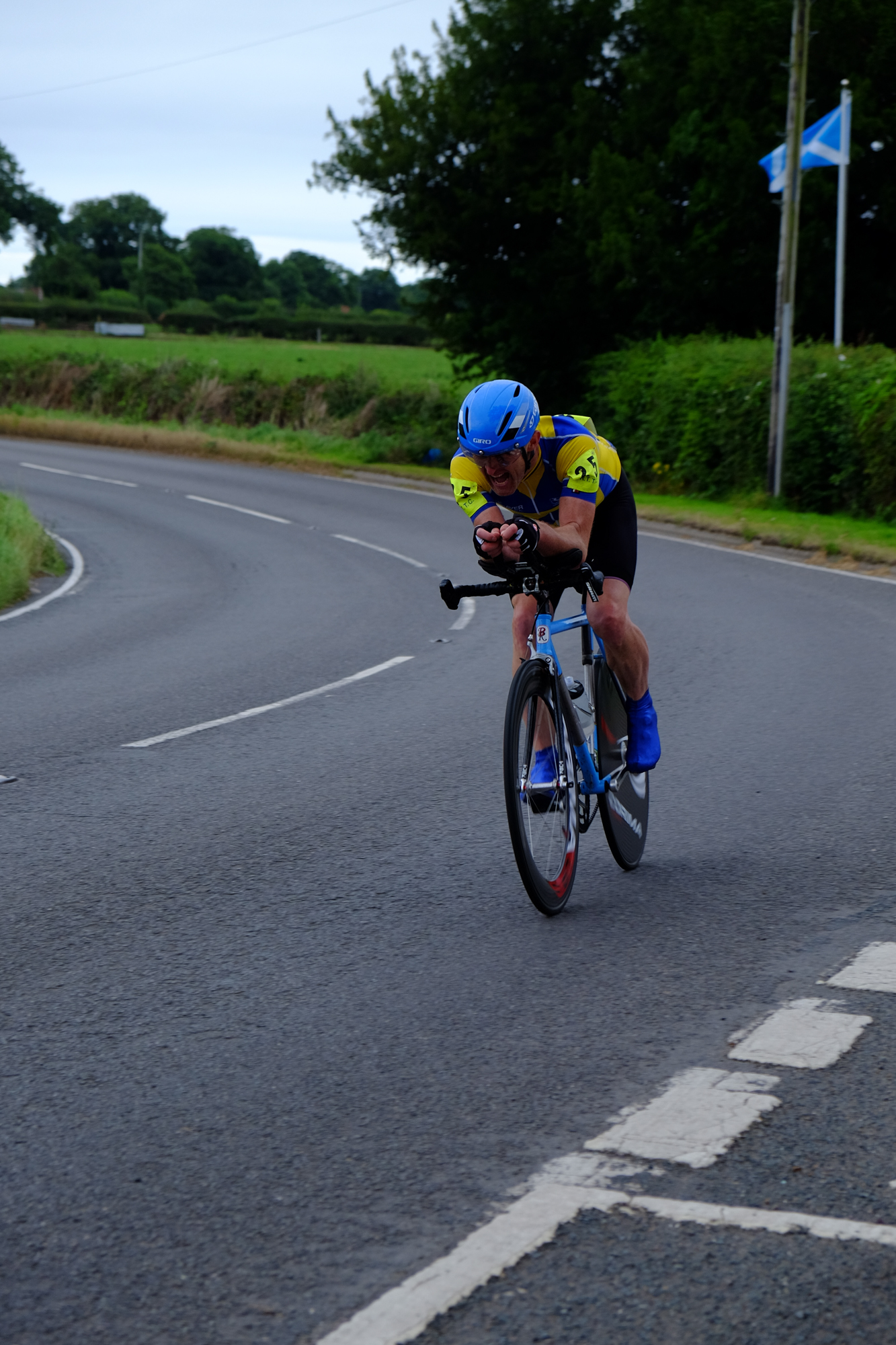 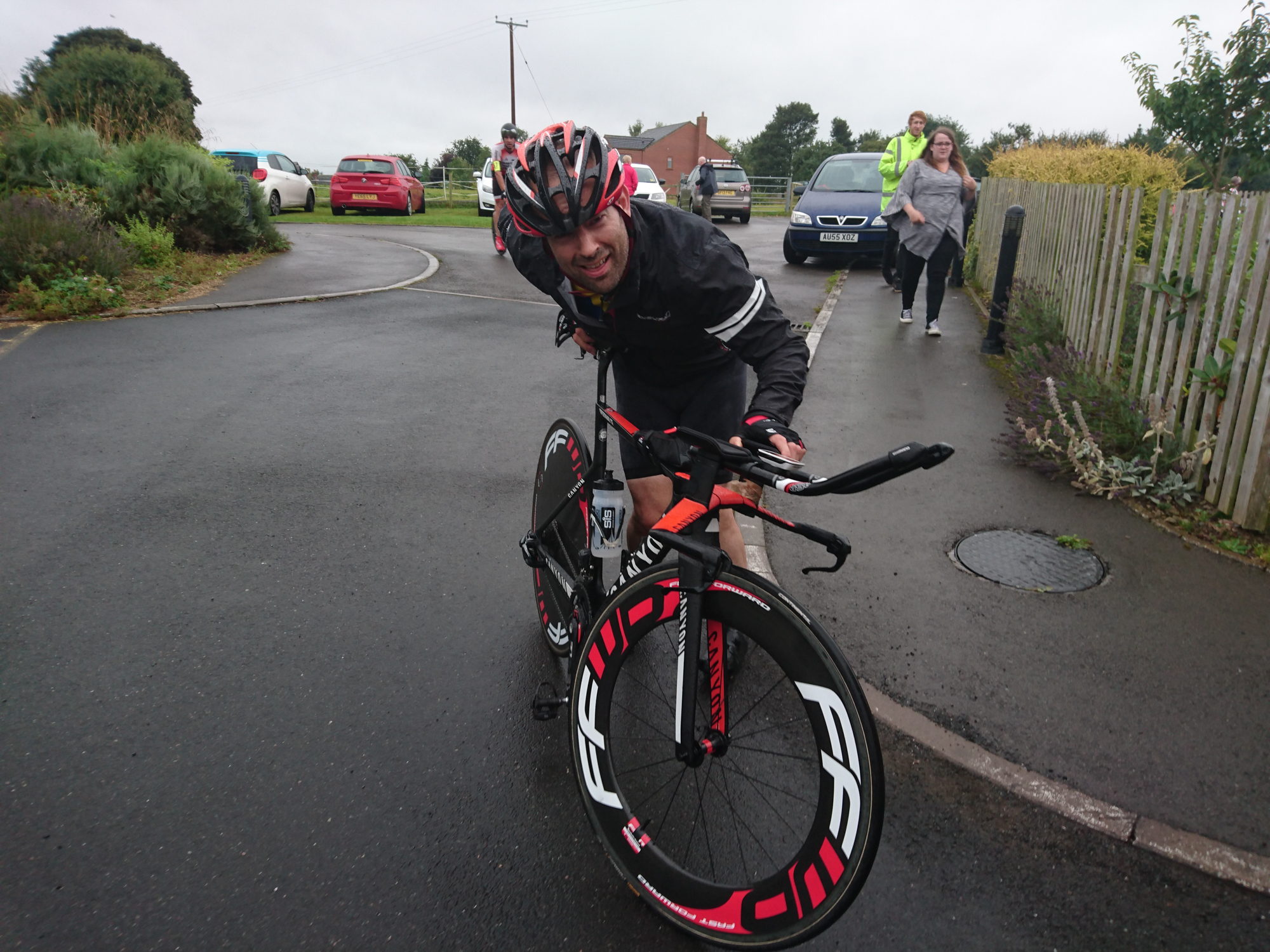 ‘I’m not feeling very well’, says the look on Alistair’s face, shortly before being not very well… 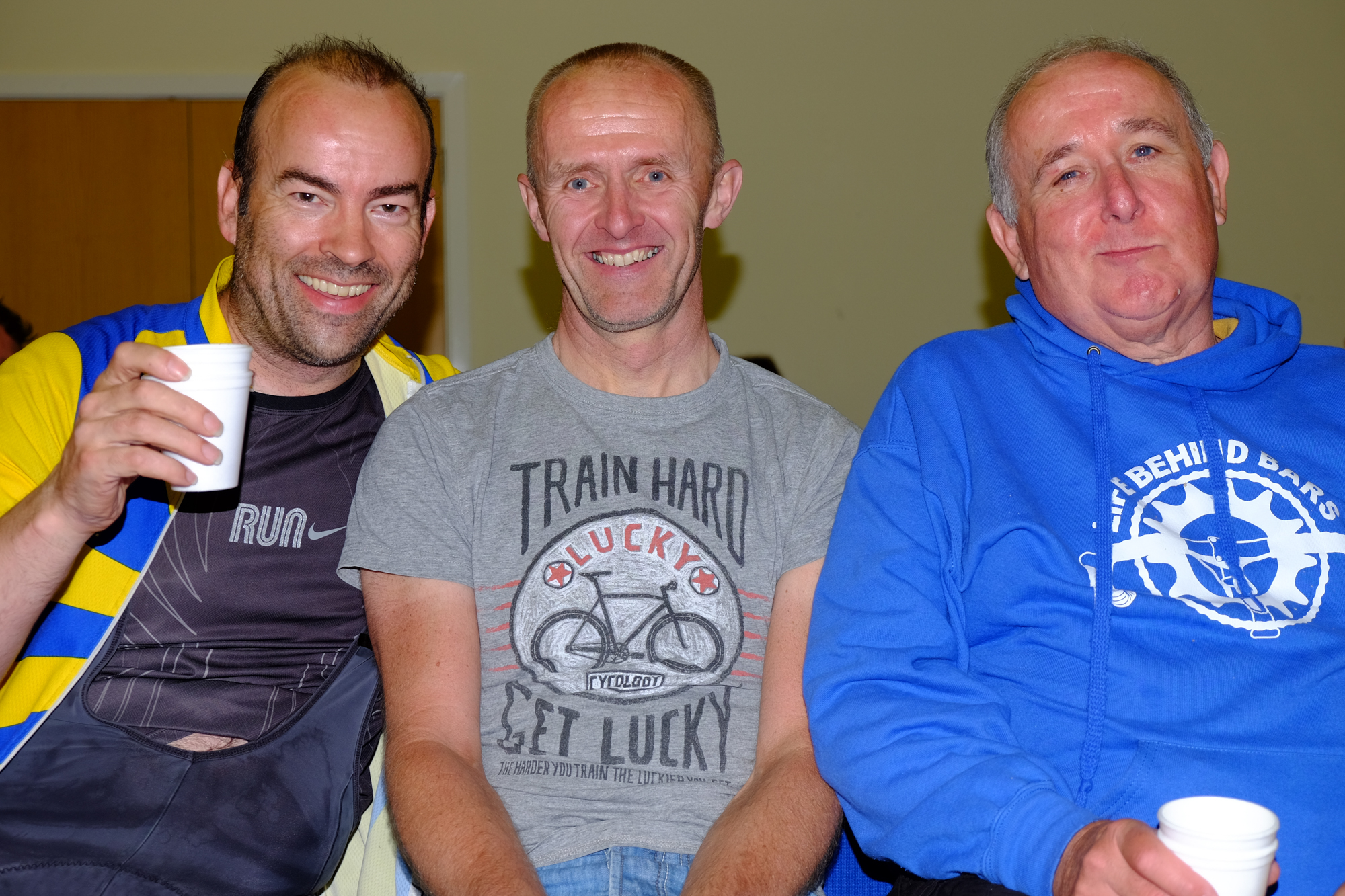 The dream team. Happy after breaking the club record by a tiny margin! A win is a win though!

Fingers crossed they don’t mark down the provisional mileages when they do a cross check before publishing the official result as the current list is provisional.  Nail biting stuff!