Pop on the kettle as this could be a long one! 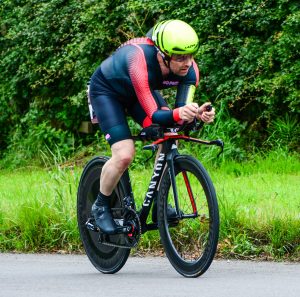 This year the annual local 12 hour and our club championship attracted just one entrant from the WVCC, as is often the case in this challenging event.  Alistair Stanway was 2nd counter in the team record breaking trio last Year and this year he was determined to use his experience to good effect.

His teammates from 2016, Jim Williams and I reverted to the role of support crew this Year together with Caroline Fearon who has more experience of feeding in 12 hour TT’s than most in the club as she has fed me in my rides plus one 24 hour.  Her experience would be a big help.  Originally Jim was planning to come out in the afternoon just to give Al some verbal support but as you will see shortly the plan changed on the day, as fate intervened…..

It was an early start as Al was off at 06:39 from the usual start at Prees Heath café.  The conditions were excellent as it was a little cool but not too cold and there was just a light breeze.  Al had put together a schedule as a guide with strict instructions from me to tear it up if things started going awry (Jim D – That means pear shaped).  His first 25 mile split was a 1:08:00 which is well within Al’s grasp as he regularly beats 1 hr in 25 mile TT’s.  The morning course took the riders down the A41, right to Espley and then 10 miles down to Shawbirch near Telford.  Riders then returned the 10 miles back to Espley and then repeated the 20 mile leg twice more.  On this first leg Al passed through 25 miles in 1 hr 10 mins so 2 mins down on schedule.

We were not too concerned about this 2 minute deficit as it was early days and it’s better to be slightly behind early on than to start too quickly and blow up later on.  However this long straight road with a few undulations and a rough surface at Peplow, is quite tough to take mentally and as it is out and back you can see who is flying and who is not which can be distracting when you’re trying to ride your own race.  However at 50 miles his second 25 mile split was 1 hr 12 mins and this was starting to ring alarm bells as Al was struggling to get into a comfortable pace and he was already complaining about stomach problems.  I could sense a long day ahead or worse still a very short one!

On the plus side he was sticking to his feed plan so dehydration and the dreaded bonk should not be an issue, so long as his stomach problem could be kept under control.  Large quantities of carbs can be a problem but it was early days so something else must have been causing the problems, as he was only taking carefully measured amounts of carb and had had very little at this point.

3hrs in and at 60 odd miles Al was looking very pale and continuing to slow down further when things went from bad to worse.  We pulled over into a lay-by and as we got back into the car we noticed that the windscreen wipers were going, but the key was not in the ignition.  Also the lights had switched on, every warning light on the dash was illuminated and a message was on the console stating “engine component failure!” I tried to start the engine and nothing happened.  We were in the middle of nowhere at the furthest point from the HQ at Prees and more importantly we had all the stuff needed to keep Al going for the next 9 hours!!!!  I stayed calm’ish and thought of a plan to help Al, ringing Jim Williams to see if he could come out slightly earlier than planned to collect Al’s stuff and meet him further down the course.  10 minutes later I tried the ignition again and it started  and all appeared to be normal apart from a warning light on the dash asking us to contact service (gulp)!  I called Jim again but he came out anyway just in case and for the rest of the day we kept the engine running and our fingers crossed!

10 miles later Al pulled over.  His stomach was getting worse, plus he had just been stung on the forehead by a bee and on top of that his Garmin mount had shook loose and needed fixing.  I quickly grabbed the screwdriver and also let him know about the car problem just in case it happened again, so at least he would know that Jim was on his way to help him. Apart from all this everything was totally under control (not)!  Jim arrived more or less at the 100 mile point and Al went through in 4:58:54 so slightly over 20 mph average despite his many problems to that point.  Shortly after this we gave up on the time checks as it was looking highly likely that Al would not be able to continue as he was still slowing and he had to stop twice due to his worstening stomach problem loosing several minutes each time (say no more!).  We were adjusting his feeding to try to settle his stomach and he was taking ginger and eating ham sandwiches rather than sugary food.

At around 160 miles he stopped and I hastily called a “team meeting”.  At this point he was on his 4th lap of the 22 mile afternoon circuit and we were convinced that the finishing circuit would be opened by the time he completed the 4th lap.  If so he would not have to complete the 5th and 6th laps of that circuit and once he passed the first timekeeper on the finish circuit he could end his ordeal but would still get a recorded distance on the result sheet, thus taking the club championship.  He accepted that the schedule was long gone and it was now all about survival for another half an hour or so.  Jim gave him an Immodium and I switched his bottles to ginger cordial in a final attempt to settle his stomach.

This proved to be a turning point as he looked better and his pace picked up.  He was riding at a sustainable pace and the frequent stops ceased.  Mercifully we were right and the Finish Circuit had opened when he arrived at it at 167 miles with “just” 3 hours to go.  I can tell you that everybody perks up when they get on that finish circuit as mentally it feels like you have made it no matter how long you still have to go.  You are constantly seeing riders, helpers, spectators and timekeepers every couple of miles and this lifts you.

Just when we thought things were looking up, the heavy rain started!!  At first Al found it quite refreshing as it had been quite warm all afternoon, but quickly it became miserable and it was getting colder.  We stopped him to put a jacket on and amazingly he was looking better than he had all day, but his bloodshot eyes gave away the underlying stress.  Importantly he was back in control of things and no matter what, he was going to do the full 12 hours and this kept the legs going round, steadily piling up the miles.  I should mention at this point that 2 sets of 3-way traffic lights had sprung up a few days before the event and it was impossible to change the course.  As a result the top riders who completed all 6 of the afternoon loops and 6 of the finish loops, had to pass through these lights 18 times! This made the overall result a bit of a lottery as some riders made it through and others were stopped but I doubt that anybody made it through every time.  Although the stops were very frustrating for the top lads, I think Al and many other people who were suffering were grateful of the occasional rest, by this stage of the event.

Finally at 18:39 Al arrived at Timekeeper no 8 and was told that he had finished.  Clearly this had been the hardest day of his life but he must have felt an immense sense of pride and satisfaction.  Despite suffering for the best part of 10 hours and having many stops along the way he still got within 5 or 6 miles of his PB set last year.  It takes a while for the organisers to work out the exact distances as they have to work through all of the check sheets to figure out who did what legs, but he did somewhere between 216 – 218 miles and his PB is 223 miles.  He was 22 miles short of his schedule but this doesn’t matter as this performance was all about having the mental strength and determination not to quit despite massive problems.  This has to be the best ride that Alistair has ever completed by a long way and in the long run this experience will help him in the future.  The title was taken by a worthy champion and as Jimmy and I both said to him after the event, “It’s all good experience for the 24 hour”.  Unfortunately I can’t print his reply!

Event winner was Victor Chetta of Mid-Shropshire Wheelers who recorded 280 miles winning by just 1 mile ahead of Ben Norbury of Congleton CC.