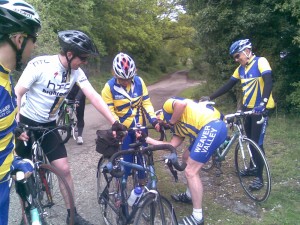 Definitely one for a caption competition…

Kev had dreamed up a route to Blaze Farm for the long run, which he announced at the Legion only to be met by a widely expressed  grumble of “but that involves hills” (indeed it does, radical I know for a cycling club to cycle up hills!) followed by universal bottling out.   So – the short run set off for Two Mills (just for a change) leaving just Kev, me and a new rider who looked like he could mix it a bit, looking at each other.  Now I don’t mind riding into the hills hidden amongst a bunch of a dozen or so – but riding on the wheels of two climbers (or not riding on the wheels of two climbers) didn’t really appeal, so off I set with the short run, and looked over my shoulder to see Kev and our poor climber joining us rather disconsolately on the “if you can’t beat them, join them” principle.
So – we were now a very large group, and having climbed up Overton Hill we decided it would make more sense to split into two, and I decided to stick with the shorter run.
Our ride was not without incident.  We rode at a good pace along the Chester Greenway, (“look at us we’re a proper cycling club, we might not like hills but we like riding fast on flat shared use strips of tarmac”) scattering dog walkers, small girls on Barbie bikes and large blokes on Halfords entry-level full suspension mountain bikes – only for Sid to puncture (I gather this is not unknown).  Whilst we waited for this to be fixed, we suffered the indignity of said dog walkers, small girls and large blokes going past us again.  Then Sid decided to take out one of the large blokes on a tight corner, resulting somehow in Terry being found in a ditch.  Being a locally well known British Cycling accredited racing judge, Terry asked the large bloke for his BC licence number so he could fine him, but somehow this was not forthcoming.
The sprint to the cafe was led out by Elaine: a desperate, disorganised and decidely dangerous bunch sprint followed, which Ady won.
On the way home Titch decided to ride fast through some challenging-looking rubble and hey ho, he punctured: not just a slow phut sort of puncture but a BANG type.  We challenged Titch, who is a bit of a dab hand at bike mechanics, to set a PB at fixing it.  Half an hour, three inner tubes and a patched tyre later we continued on our way.  In the meantime, we were diverted by low grade banter and innuendo – see photo above –  the need to screw Caroline’s handlebars tighter played to Garry Brown’s creative approach to interpretation.  But we had juniors present (and as someone pointed out, senior seniors, too) – so to avoid corrupting either, a pact was struck that no further ribaldry would be tolerated.  So Garry was uncharacteristically quiet for the rest of the ride.
And so home, with Titch winning the race through Delamere Forest (I thought I was coming in second, only to realise that Ady and Dave D had been quietly and unsportingly sitting on my wheel the whole way, and they shot past me, with Dave pipping Ady to the sign).
An enjoyable run, rather warmer than today’s Giro stage, which I’ve just finished watching.  Thanks everyone for your company – and welcome to our new riders, Andy and Paul.  Please post any submissions for the caption competition on the road runs section of the forum, I’ll think of a prize!
Road Runs
Club 10 mile TT – Guardian Cup Round 1 – 15th May 2013 – Results
Club 10 mile TT – Guardian Cup Round 2 – 22nd May 2013 – Results