Tour of the Abberleys – An idiot’s experience

Alan Kemp, on my only Sat training ride of the year, smoothly cruised up next to me and in his silky persuasive tones asked if I was interested in “doing a little event in the Midlands with him”. “It’s a great race and it would be good to have a teammate along.” Four stages over three days but one of them is only 3 miles long and “it’s a great craic.” Not a chance I said, sounds much too hard.  I’m not stupid you know……

So how the hell did I end up doing it whilst Alan went on a cruise – answers on a post card please, addressed to “The Stupid One”.

I arrived in the carpark early on the Saturday to get a parking space and to enjoy the atmosphere.  It was a cold but sunny day, I signed on and started to get my kit sorted. I had packed the whole of my cycling wardrobe plus spares as I didn’t know what to expect but most people seemed to be getting into skin suits. Worryingly they were also all setting up rollers or turbos and starting to energetically warm up. There was still almost an hour to go till the start, perhaps I should warm up?  Nah why warm up when you are facing three days of racing, save your energy. Half an hour later and six kit changes/alterations I was in skin suit, shoe covers and my “aero” road helmet. Time trial bikes were not allowed but I was using my new Giant Propel aero bike with deep section wheels so looked the part even if I didn’t feel it. I relented to peer pressure and pretended to warm up, riding up and down the road a bit and round the carpark a few times but felt very amateurish compared to the sweating masses on their turbos/rollers.

Well, note to self, I should have warmed up properly.  The stage started straight up a hill and half way up I could barely breathe or turn my legs over and had to hang on for 7min 49 secs of hell. This is put into context by Kris Zentek’s 6 min 45 sec winning time in the under 50s race. (I was in the over 50’s) but in my race I was sitting 21st out of 38 after the prologue, so reasonably happy as 10 of those ahead of me were in the younger age group. 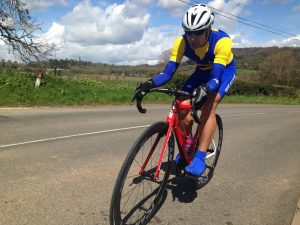 After an hour and a half rest, the weather deteriorated and 2 minutes before the start of the second stage the heavens opened and it hailed and rained for 10 minutes – the start was delayed but it meant we set off in very wet conditions and with no mudguards it was very messy! A fairly uneventful three undulating laps for 45 miles where I hung onto the bunch, at times at the limit of my ability. However I felt my best on the last lap and even managed a bit of a sprint to finish in the top half of the field. Day one finished and I was 19th in the race and 7th in my age group.

Second day was a 55 mile 5 lap hilly route. I’d checked it out the night before in the car and was not too worried. A day full of attacks which always means lots of accelerations where you are hanging on for your life, followed by periods of recovery where you can catch up on Facebook. I was always near the rear end of the bunch as the pace was high but never in any real danger of dropping off, though the field was definitely thinning out as we shed riders consistently during the stage. An uphill finish suited me and again I moved through the field in the latter stages and generally felt not too bad to end the second day in 17th place but still 7th in my age group.

I then made the mistake of driving round the finishing loop of the final stage. This did not help me sleep that night. The stage was only 35 miles with a 15 mile warm up loop down towards Worcester followed by two finishing laps of 10 miles each with two significant hills each lap, one of a mile and a half and 18% max gradient. Still my age group was only split by our prologue times so I was only 30 odd seconds off the lead and I even entertained thoughts that I had an outside chance of sneaking a win if I could hang on until the final climb and then go for it. Ha Ha, Leicester had a better odds of winning the premiership!

The final day dawned cloudy but dry with rain forecast later. The “warm up” loop felt like flat out sprinting for 10 miles as attack after attack tried to get away, only easing off as we approached the finishing circuit and people drank, ate, offered prayers to their god and mentally prepared for the ordeal.

I moved up the bunch so as to not be hanging on at the back and suffering the inevitable whiplash effect as we exited the left hand turn onto the circuit and straight up the first hill. Despite this plan, disaster struck as I slipped my chain trying to change gear at the start of the climb.  Nothing to worry about I told myself as I got it back on easily and quickly for once. I was only just off the back, meters away from the rear of the bunch. However, as I tried to catch back, riders ahead of me were losing contact and even though I was catching and passing a few, the back of the group was slowly disappearing. I wasn’t helped by the cycling gods draining all of the blood and energy out of my legs in a perverse experiment in pain infliction.

I still didn’t panic and thought I would catch back on during the 2 mile descent coming up. It always seems to work in the Tour.  However, I am obviously neither Mystic Meg nor Vincenzo Nibali and despite riding as fast as I could down the hill, some would say recklessly so, the bunch was barely in sight, around 400 metres up the road as the descent ended.

In the valley, four of us teamed up to work together to try and get back on but all that we did was exhaust ourselves further. (or at least I exhausted myself) So the nightmare major hill was just that, with the added disappointment that I could see none of the D cat rivals I cunningly planned to beat. I wonder if any of them realise the lucky escape they had. Still three of us got together again on the descent and stayed working as a group until the bottom of the big hill for the second time, where I had a surge of energy and rode away from my companions.

So I finished 21st out of 26 finishers and sixth in my category. (Yes the observant amongst you will note I moved up a place) Not earth shattering and I probably won’t be getting the long awaited invitation from British Cycling to join their development programme for promising riders.   However, I finished, which was not a given at the start and I have to admit, albeit two days later that I really enjoyed the whole experience and my first ever stage race.  I can’t decide whether to do it again or go on a cruise. I have this niggly feeling that I will be back next year, as I have unfinished business to attend to, it would be great to have some company….

Massive congratulations and respect to Kris whose team mate Craig won the under 50’s race with great support from Kris who himself finished 6th overall.  This achievement cannot be underestimated as between them they wore the yellow jersey for most of the race and were constantly attacked by other teams and riders.  Chapeaux to you both.

Finally thanks to Alan for suggesting the race, I hope you enjoy your cruise!