To Romiley the hilly way

A hard 70 mile ride today, led by Jules et Jim.  (If you don’t get the reference, google it, under French films!).  We three, plus Kev, Carol, Tony, Tim T, Chris G, Ewart and Titch made it to the cafe – Gareth, Rob, John K, Craig and new rider Penny turned off at various stage en route.   We rode out at a brisk pace via Henbury and Bollington, up the Brickworks climb, then over the hills (and beautiful they were) towards Romiley.  Jim’s route finding worked out fine until we hit the A6 by mistake – but he rescued his credibility by getting us back on track – over many more hills – and soon we were at the cafe.  This had an Italian name which I can’t remember and was full of cyclists, pictures of cyclists, and general cycling stuff – including a rainbow Philippe Gilbert cake which Tony was very taken with (see below) – and free Haribos as we set off.  And so home, via Wilmslow and Tatton Park, at a brisk pace, but we stayed together which made it a bit easier for those of us who needed to shelter behind wheels.  I don’t have the stats but we did 70+ miles, loads of climbing, and a pretty swift average speed.  A really great ride, so thanks to Jim fo the route, Jules for keeping us together, and everyone else for great company. 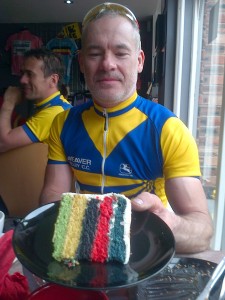 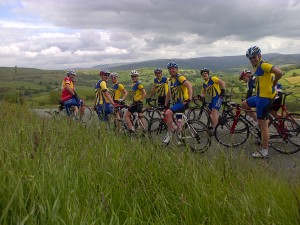