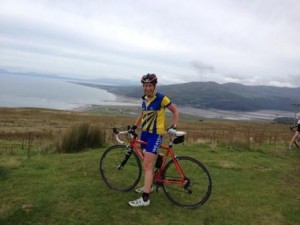 The view over Barmouth – worth the long, steep climb out of Twywn 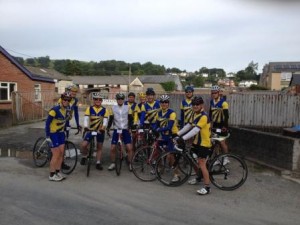 At the start…we were not together for long… 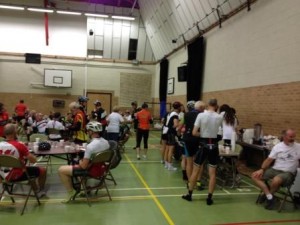 A dozen or so WVCC riders rode in the Wild Wales Challenge today, enjoying/enduring a tough 85 mile route with no less than 7,500 feet of ascent. We started in Bala, climbed up to the Bwlch-y-Groes, then down and up and down and up and down and up to the outskirts of Barmouth, then Dolgellau, then back to Bala, mostly on very minor and often rough, gravelly and steep roads – so steep you couldn’t even relax on the descents. Some of the hills were monsters, one in particular was a never-ending series of 15 to 20% ramps that must have gone on for at least 3km. But the atmosphere was fantastic, with many different clubs represented, the route was amazing, using really quiet roads with stunning views across the hills, and the whole thing was informal but incredibly well organised, with well-supplied tea stops and friendly marshals. It wasn’t a sportive, I can’t remember how much it cost but it wasn’t much, and the whole event had a friendly non-commercial feel about it.
Of course you cannot tell Jim Duffy, Julian, Geoff M, Colin or Pauls G and H not to be competitive and as soon as we hit the road they were scooting past large groups from other clubs to get a head start, racing up the Bwlch never to be seen again. Kev stayed back to keep me company (thankfully) and we saw a fair bit of Vince, Terry, Keith and Jeff en route, and also Andy Beswick who made the interesting decision (which he may be regretting) to ride his mountain bike rather than a road bike. When we passed him he was in the excellent company of the only other mountain biker in the event and someone riding a recumbent.
Jim and company started at about 9 and were finished by 3.20, riding at over 15 mph, whilst we came in about 4.30, riding at 14 mph. Martin Whyard suggested this event to us in the first place, and has entered it for several years – he set off before us and must have maintained a cracking pace up all the hills because he also finished back in at the event centre first…chapeaux Martin!
They don’t have winners other than the club with the most riders finishing. I’m not sure who this was, but one rider from Port Sunlight told me they had 50+ riders out, so they would have been in with a shout I’m sure. So come on all our WVCC members, let’s see how many of you we can get into this event next year!