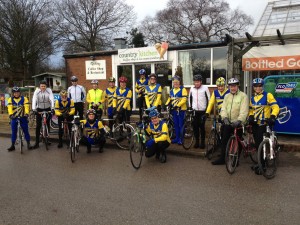 Despite the long run departing 30 minutes earlier on their epic trek to Loggerheads, there was still a good turnout at the Legion encouraged by overcast skys and mild temperatures.

We headed to Radway Green instead of the planned Two Mills, taking in a route up to Davenham, round the back of Warmingham into Alsager and then to the cafe. Unfortunately there was trouble just up the road as young Elliot slipped on wet leaves during the decent down to Blue Bridge. He landed heavily on his hip before his Dad, on full brake, rode into him! Shaken, torn and a bit sore he got up straight away and headed home to repair. At least at the age of 13 he can now say to his mates he is a true cyclist!!

Radway Green has one of the best sprints to a cafe (on a par with The Mills & Ice Cream farm) but unfortunately has a set of lights before it, so it can be hit and miss. Unfortunately the lights had us today, after a cracking wind up the lights changed at the wrong time. We will never know who would have picked up that sprint but there was Spanish Jed just coming up alongside me with Al sneaking around the outside. I think Paul West was even in the hunt somewhere too.

We made our way home up through Weston and unfortunately Crewe where we engaged with a number of friendly Sunday drivers. Beeps of horns were met back with Phil Sharrock’s new toy (and very loud) horn.

It was a good day out on the bike, I had just shy of 50 miles when I got back but the legs felt really tired despite the relatively low mileage. I’ll put it down to heavy Winter roads.

Great crowd out, good to see some familiar faces out again including Paul West seeking some early season miles. We also had a couple of members returning from the Weaver Valley CC medic room too. It was great to see Carol back out all be it still struggling with her arm. Respect for making the effort and she looked really strong on her mountain bike all day. Graham was also back out having had the all clear to ride too.

Other riders including Al Silver, new rider Steve, Bruce, Caroline, El Presidente, Terry, Jack, Elaine, Spanish Jed, Dr Alan, Andy Hammond, Matt and also honourable mention to Dave Fearon who was due to join us at the cafe but never did and Les who turned off around Davenham I think.