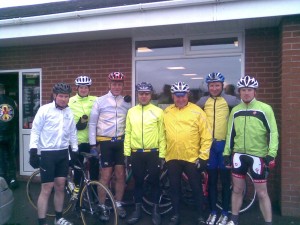 A good turn out at the Legion today with two new riders, Nicola (good to see our girls’ contingent increasing in number) and Anthony.  A warm welcome to them.  The short run went to Holt; I joined the long run to Prees, along with Jim W, Bruce, Ewart, Richard M, newish riders Peter and Jamie, and Kev as run leader.  We rode out whilst it was still dry, and Kev took us through Wrenbury and out on the undulating road which circumnavigates Whitchurch, arriving at Prees from the East.  Kev, Jim, Richard and Jamie took turns at the front and did a great job keeping everyone together.

At Prees, Jamie opted for the jumbo English breakfast and I think it’s just possible he regretted this later.  When it started raining he was delighted because it meant he could wear his new green Castelli rain top which he’d bought yesterday half price – although this was apparently still 15x more than Jim’s top which cost £4.99 from Aldi.  The words “boil in the bag” sprang to mind, but Jim insisted his top was just as good as Jamie’s.  Interestingly, on the return ride, when it rained constantly, Jim soon took his off, whilst Jamie kept his on, looking cool and comfortable!

Kev took us on a complex and enjoyable route home via High Wych and Malpas (Graham, he’s getting better at navigation, honestly!) although his insistence on saying “left” when he meant “right” and vice versa kept us all on our toes.  We rode on narrow muddy lanes, encountering little traffic other than one monster tractor with spikes all over it: as soon as the driver saw Jim and Ewart, he decided that discretion was the better part of valour, and pulled over to save us all from being shredded and turned into hay bales.

Jim cranked up the engine in his down tube to take on all-comers on the Peckforton road and we were all marvelling at his turn of speed when he turned right to ride home on his own, leaving us to wend our by now very sodden way home without him. Conversation became more desultory as tiredness took over (and we no longer had Jim with us!)  Richard left us at Beeston Castle, Peter at Whitegate and then we were three, with Ewart rather less frisky than normal as he wasn’t feeling well.

Back home with tired legs – it was a steady ride by long run standards, (I imagine some of our faster riders were racing today) which suited me just fine, given I’d been mountain biking yesterday, and it was nice not having to worry about getting dropped.  We covered 71 miles, 3,000 ft of ascent, and averaged 16.3mph.