It’s been a while since I’ve written an off-road blog shamefully, particularly when viewed against the journalistic volume and quality of the road oriented contributors here abouts. I’ll make an excuse that our mountain bike jaunts are best illustrated with shots of a train of colourful riders swooping down dusty trails into dramatic vistas, but this winter there’s been a definite absence of such photo opportunities. Indeed the briefest of possible pauses to let me take the following image of the gang stood on the Meccano Bridge at the Nob End locks, (actually it’s more correctly Prestolee Locks, but you know…) on the Manchester, Bury and Bolton canal was tolerated rather than embraced with great gusto. 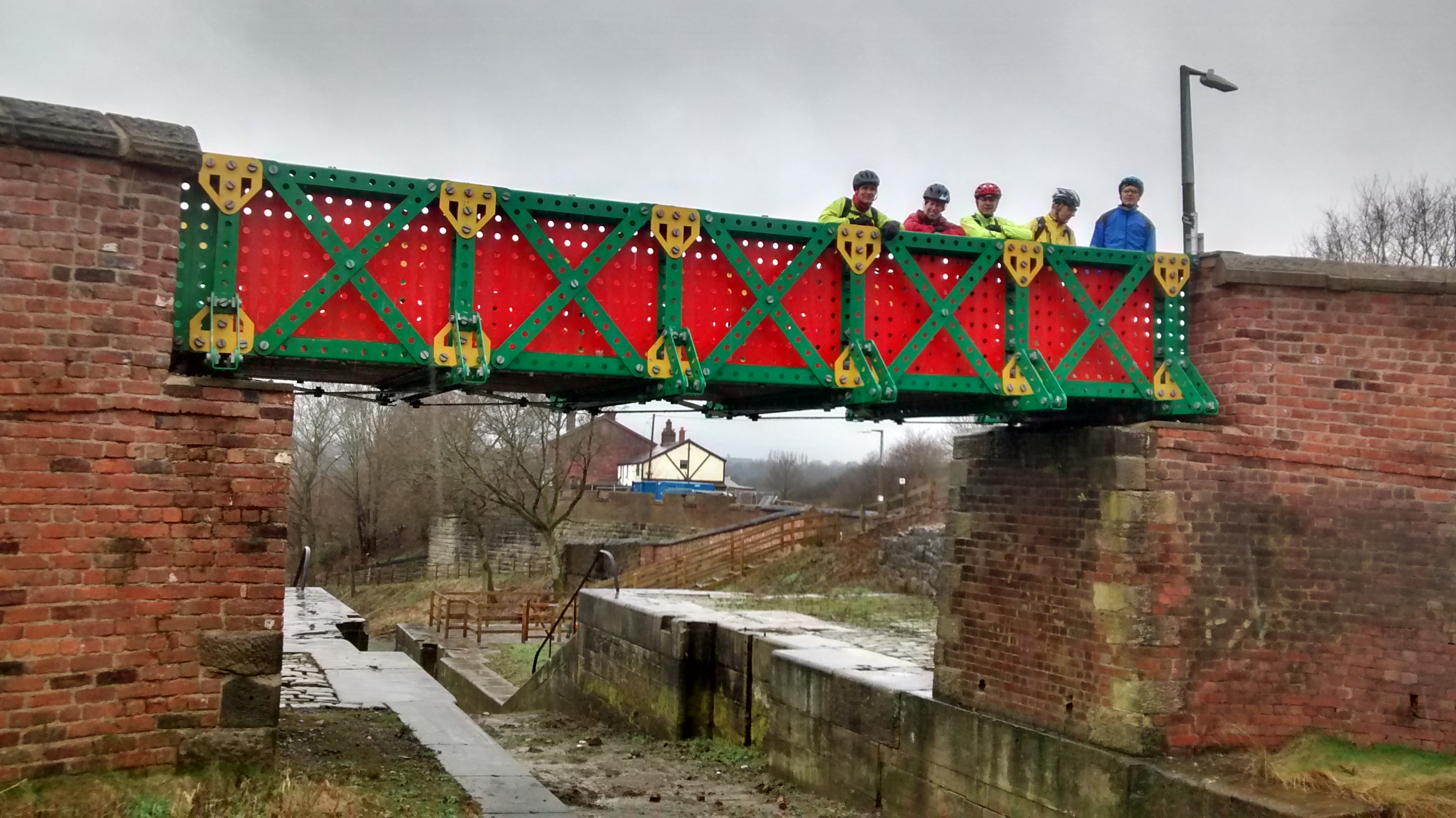 The day had started off a few miles back just outside Prestwich church, and the pub of the same name. Already raining and cold there was a measure of despondency, outweighed by positivity from most so we got the hard yard, (the first one) out of the way sharpish and rolled down Prestwich Clough towards the woodland trails of Phillips Park. Here we spent the first 45 minutes bombing around the berms and jumps provided in the park, the home of a favorite mountain bike race of many of us Hit the North which is back for another edition in February after a break of a few years. Call it training. 🙂 Next up we crossed over the M60 heading north, following the Outwell Trail, one of Sustrans old converted railway lines upto Outwell Woods on the outskirts of Radcliffe. It was getting pretty cold by now and though the rain wasn’t heavy, it was persistent and substantially augmented by water spraying off trails, often more akin to small streams. As we approached the most northerly leg of the ride following the Irwell river and Manchester, Bury, Bolton Canal the cold really started getting to us, demonstrated by people starting to question ‘how far have we go to go now’, hence the reluctance to stop for pictures, or any other reason to be fair. We’d best crack on then, ‘cos I’m not equipped for hypothermia.

In the end we high-tailed it back to the pub in just over an hour with no more stopping, drawn on by thoughts of a roaring fire, warm food and fine welcome. As the song, (sort of) goes, one out of three ‘ain’t bad – the landlady kindly told us we could have come inside to get changed in the toilets rather than scrabbling about in the back of the cars, (for those that didn’t get the benefit of Nick’s van) but the grate was empty and the food delayed. Yet still, everyone said they’d enjoyed it. Weird! So another ride of this winter season that I promised to re-run again when the weather improves. Route planning is going to be fairly easy this summer.