No-one would go out in that would they?

…oh yes they would.  I’d booked today off work for ages, hoping for a ride with the Wednesday Wrinklies.  So when I saw the weather forecast I was disappointed, convinced no-one would be out, and decided to ride to Hatchmere anyway to see.  I always arrive early – it never takes as long to get there as I think – and sure enough several Wrinklies arrived, and we huddled under the entrance porch of the Chinese restaurant, with two fierce golden lions to keep us company.  We discussed cafe options and having nearly opted for the Delamere Station cafe, we instead decided that our self respect required us to go a bit further, so set off to the ice cream farm.

The Wrinklies’ apparent delight at my unexpected presence was severely tested when my chain broke on a steep bit and they all had to stop in the cold, rain and wind whilst Derek put on his rubber gloves and prepared for action, with Chris Latter kindly donating a chain link.  Thanks chaps.

Well with jokes like that we were actually quite keen to get back on our bikes, despite the howling gale and driving rain. Once again the attraction of having me along with them paled when we set off and I realised I’d forgotten my glasses and everyone had to wait in the cold, wet and wind AGAIN whilst I returned to the cafe to find them.  I’m not sure of WVCC’s protocol in relation to black-balling, but I think it was being discussed when I rejoined them all.

And so home, with the wind picking up but happily mostly behind us, and some great chat in my case with Jed.  Thanks chaps for a fabulous ride, and marvellous company.  As always, despite the weather, I was really pleased I’d gone out.  With the already-mentioned Jed, Chris L, Garry and Derek were Sid and Terry.  Hope you like the photo – you’ll see why some jealousy was expressed by those present about the youthful colour and bouffant quality of Chris’s hair! 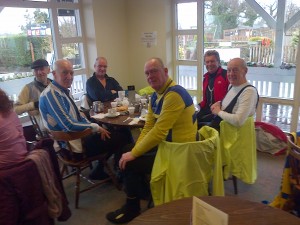