I am sorry for this lengthy tome, I was intending to keep it short but…so if you read these ramblings, sit down with a coffee, you’ll need it to stay awake!

How do I start to recount the ride of my 1st [and possibly only 24hr TT] especially when,

a] Dave Fearon has given a stunning [and accurate] account of the ride and b] I have the attention span of a Goldfish.[especially when it comes to riding a bike].

I thought I’d start by telling you of the story behind, my desire to put myself through a 24.

Regarding the 24 again, I thought ‘if I don’t do it before I’m 60, I probably wont and will always be sorry, I’d always wanted to do the full range of TT’s before I popped my clogs, so at the age of 58, I stuck a stake in the ground and decided to go for the 2016 event.

I didn’t want to break any records, our own club mark of 457 miles was set by Robert Stapleton in 1972 when he won the event, it is a seriously high standard for all but the best cyclists.

As Dave says the 24 is a mystical and special event, all I wanted to do was to do the best I could, not letting myself down and making the sacrifices made by my support team worthwhile.

So I did, often I’d go out on my own and ride with the Wrinklies then go and do another 60-70 miles on my own on the way home, I’d also do 60 after the Saturday training ride, club runs with an extra loop on the way home…8-10hr rides were quite common place in all weathers, often going out again when my body was saying ‘stop and stay in bed’.

I know I sound like some sort of beast, but you need to understand that since I was seriously ill 9 years ago, my normally driven nature got even more driven!

I didn’t have to ask for help for a support team, I was inundated with offers of help which blew me away. Dave, Graham, Syd and Ged [Ged even made sure he was at home from Spain especially for the event] were the eventual quartet.

I listened to the very experienced voices of Graham Gregory and Dave Fearon.

So to the event, when Syd Rimmer and I picked up my hire van [you don’t need one of these but for £150 it was worth it]. IT’S HUGE, I thought, but using the old adage that ‘you fill the space you have’ I filled it. 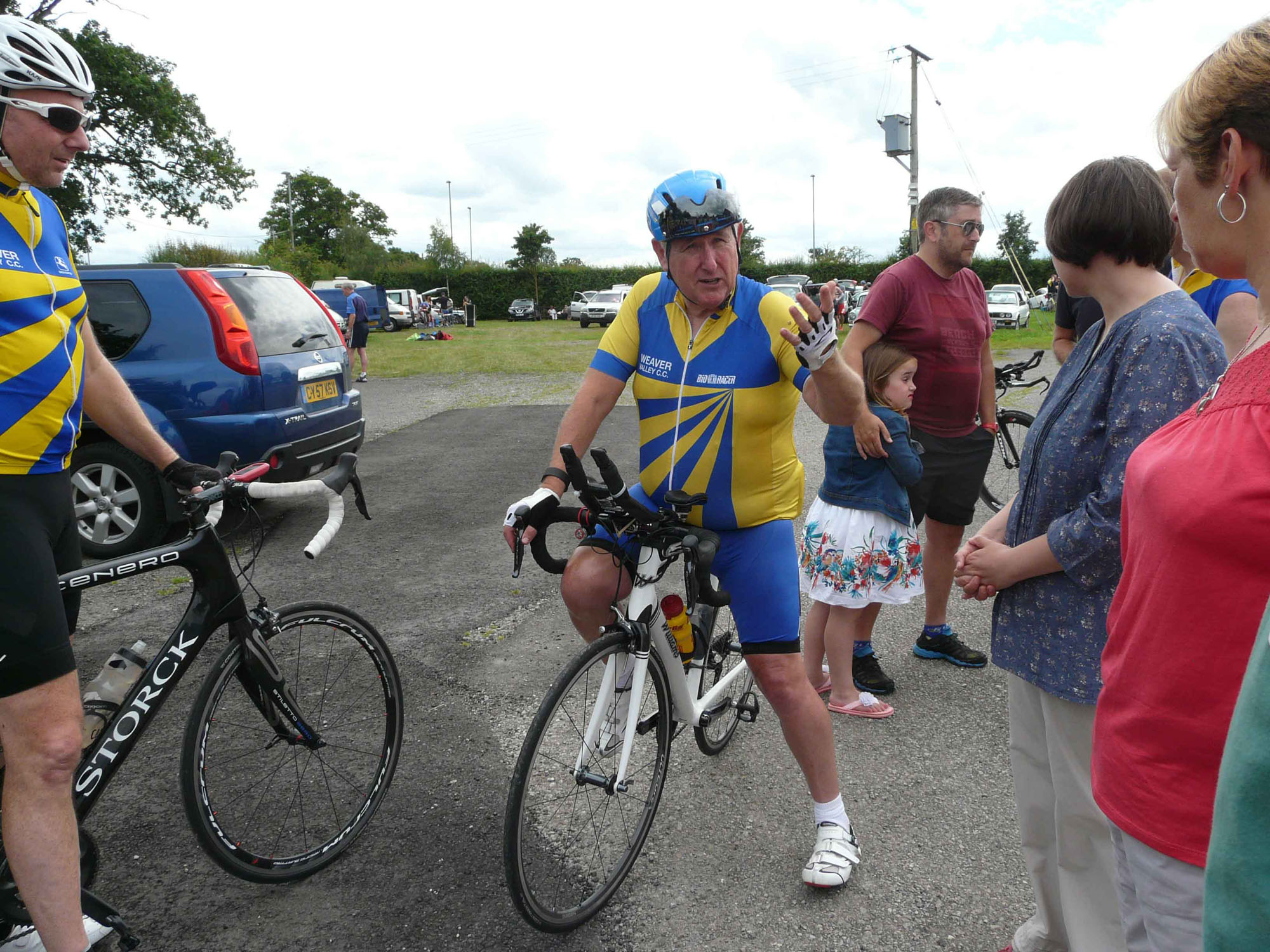 On the way to the start.

With Dave’s 24 notes as a guide I’d covered every eventuality. Most of the stuff I packed, I hoped I wouldn’t need, but it was comforting to know it was there.

So to the ride.

My very public targets for the event were as follows, [I was working on the premise that if I told enough people I was doing it, I couldn’t back out] 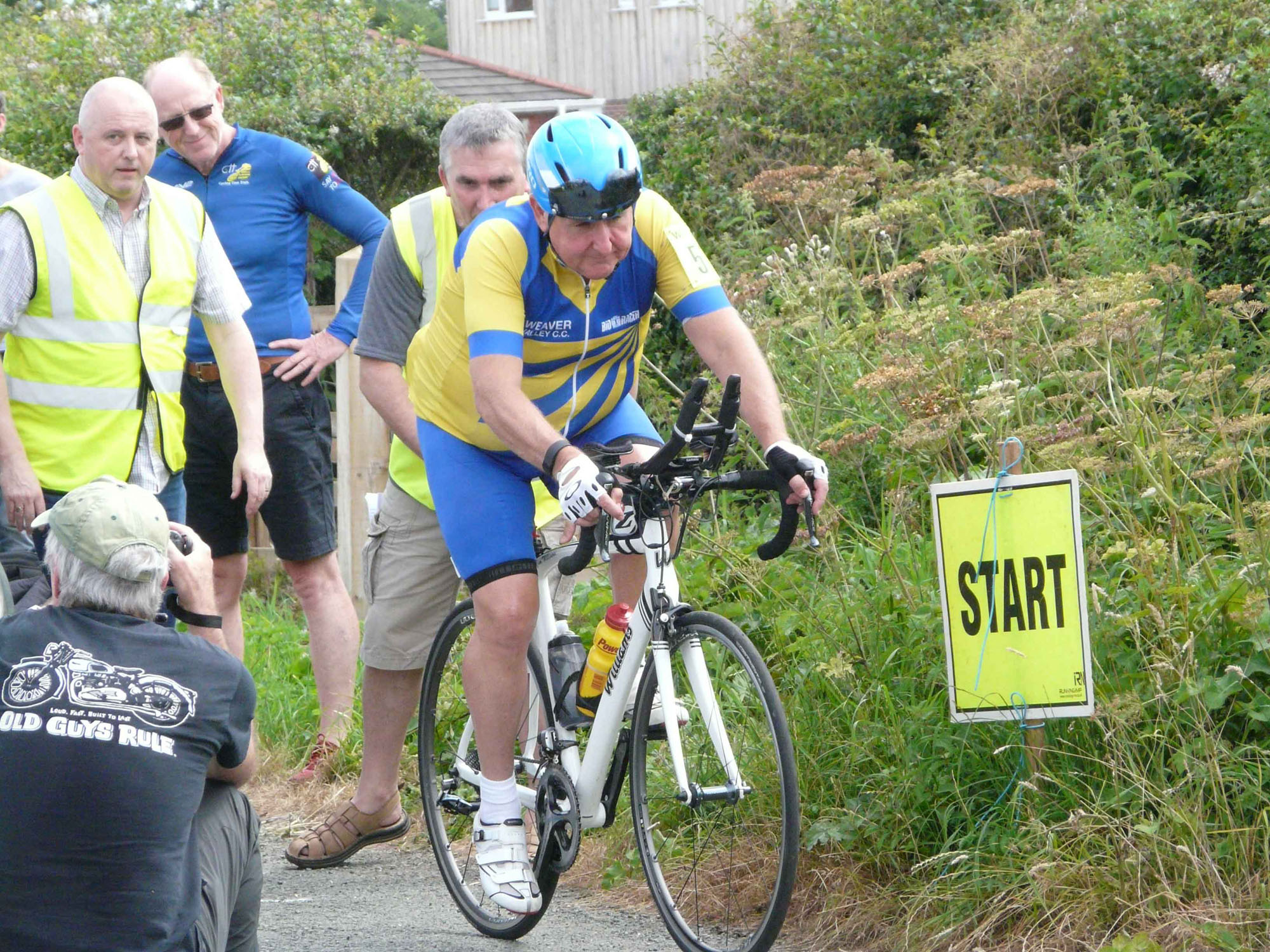 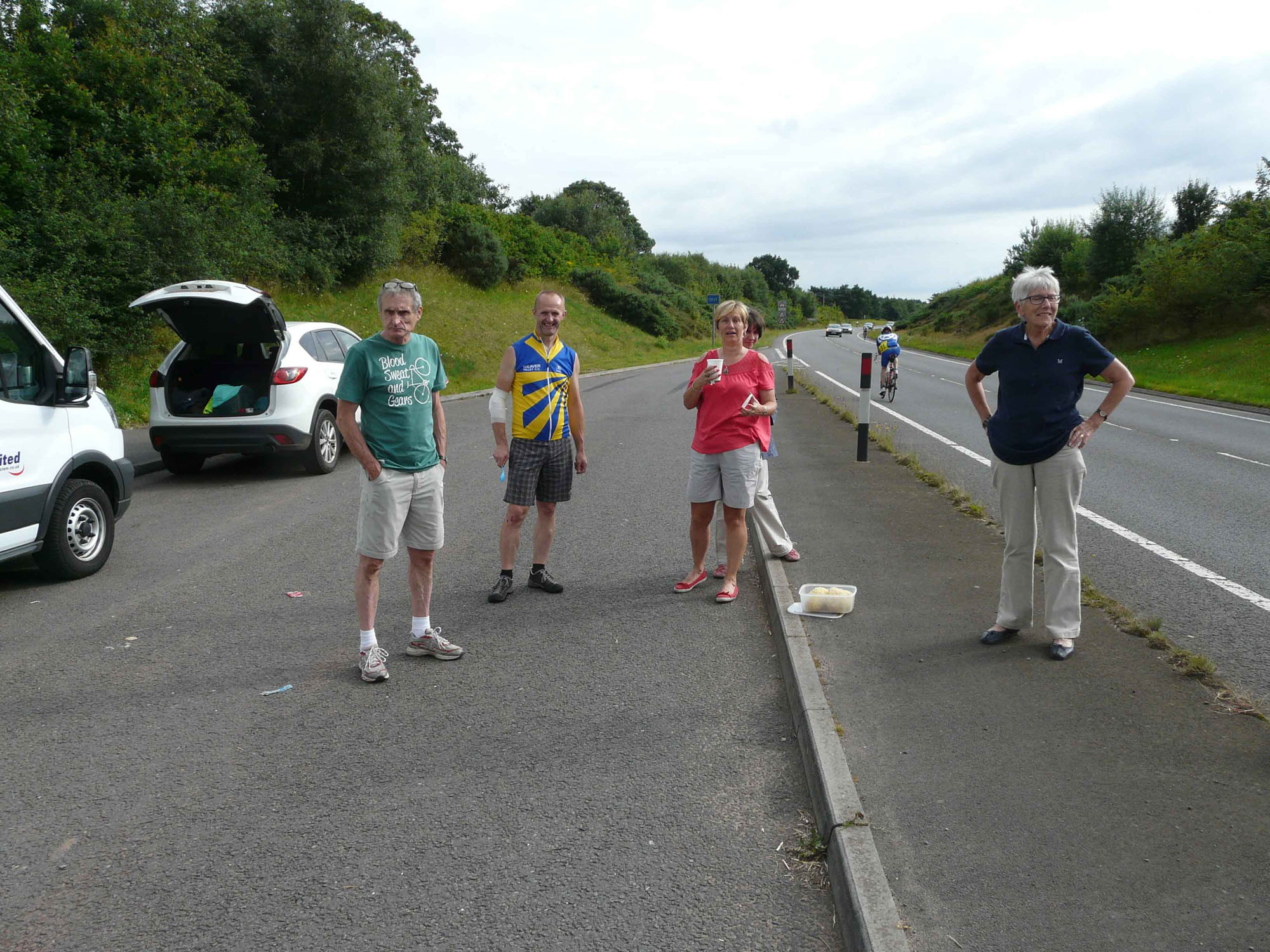 Next was to allow my pace to slow to between 17 and 18mph and hold it for as long as could. Which I managed, alarmingly well…I thought I’d hit the wall, and although I did [a bit] it was a low wall and one easy to get over. I just ground out the miles.. I was seriously in the nothing box [Derek knows where this is]

I stopped for 4 comfort breaks, always stopping at the van and never passing on the opportunity to apply more cream to the nether regions..

You see and hear some rare sights and sounds when riding a 24, there were a couple of guys weaving all over the road, “are you OK”? I asked one guy who was nearly asleep as I passed him towards Prees in the dead of night. “I need coffee, strong coffee, I’m gonna stop a Prees and blag some” he replied. At one point I thought I was being passed by a car booming it’s music out through open windows, but no, it was a fellow rider who had a radio and speaker on the handlebars, playing loudly in an effort to stay awake, how cool is that.

Everybody stops to put on lights, I’m sure the top guys only stop for a couple of mins, others like me stop for 15 or more, I stopped at Prees, had a change of clothing and Caroline supervised me having some hot rice pudding and a drink of life saving tea, Whilst Dave, Graham, Syd and Ged sorted out my bike and lights. Many riders had front lights that wouldn’t be out of place on a Coast Guard search vessel, so bright they were almost blinding, and the rear light show was fantastic, it was like an early Christmas! it had to be seen to be appreciated.

Some guys even stopped for a sleep. The rider a min behind me and I had a chat before the start and he said he’d only got to 16 hours last year when he had to pack, he caught me 15mins after the start, I didn’t see him again until about 4am the next morning, as he went passed again, he asked how I was , I said “I was OK thanks” and then said that he’d got off and had a sleep, I don’t know how long for, but I beat him by 60 miles.

Some of the rider’s rode un-supported, I could see little piles of goodies they had secreted at key places around the loops, stopping to put on more clothing or lights or to take on more food as required or had a saddle bag on their bikes, when Paul McGowan of the Warrington RC came passed, he slowed down and we had a little ‘how you doing’ chat before he went speeding on his way. But the most lifting thing are the crowds that mass at Prees during the night and at Farndon at the finishing circuit, they have to experienced to be believed.

I wont lie and say “oh, I found it easy” because I didn’t and during the training phase, there quite a few occasions were I seriously doubted whether I could do this. They say the first sign of madness is talking to yourself, the second sign is answering!  I spent plenty of time talking to myself so feel I qualify!

Although I had a couple bad patches, these, thankfully were short lived.

But as both Graham and Dave said, ‘just treat it as a long day out’ and I did.

My feeding plan was based on one that I’d plagiarized from the one Dave developed when he rode 2 years ago, a sound feeding plan underpins the race, if you get it wrong then all the preparation work can be undone.

You know, I stepped on the scales on Monday morning and I’d only lost 2lb, not bad after 24hrs in the saddle at 18mph.

I was really lifted when Dave stood at the roadside with his quickly made 400miles sign and I still had an 1½ hours to go, I thought to myself.. Job done. 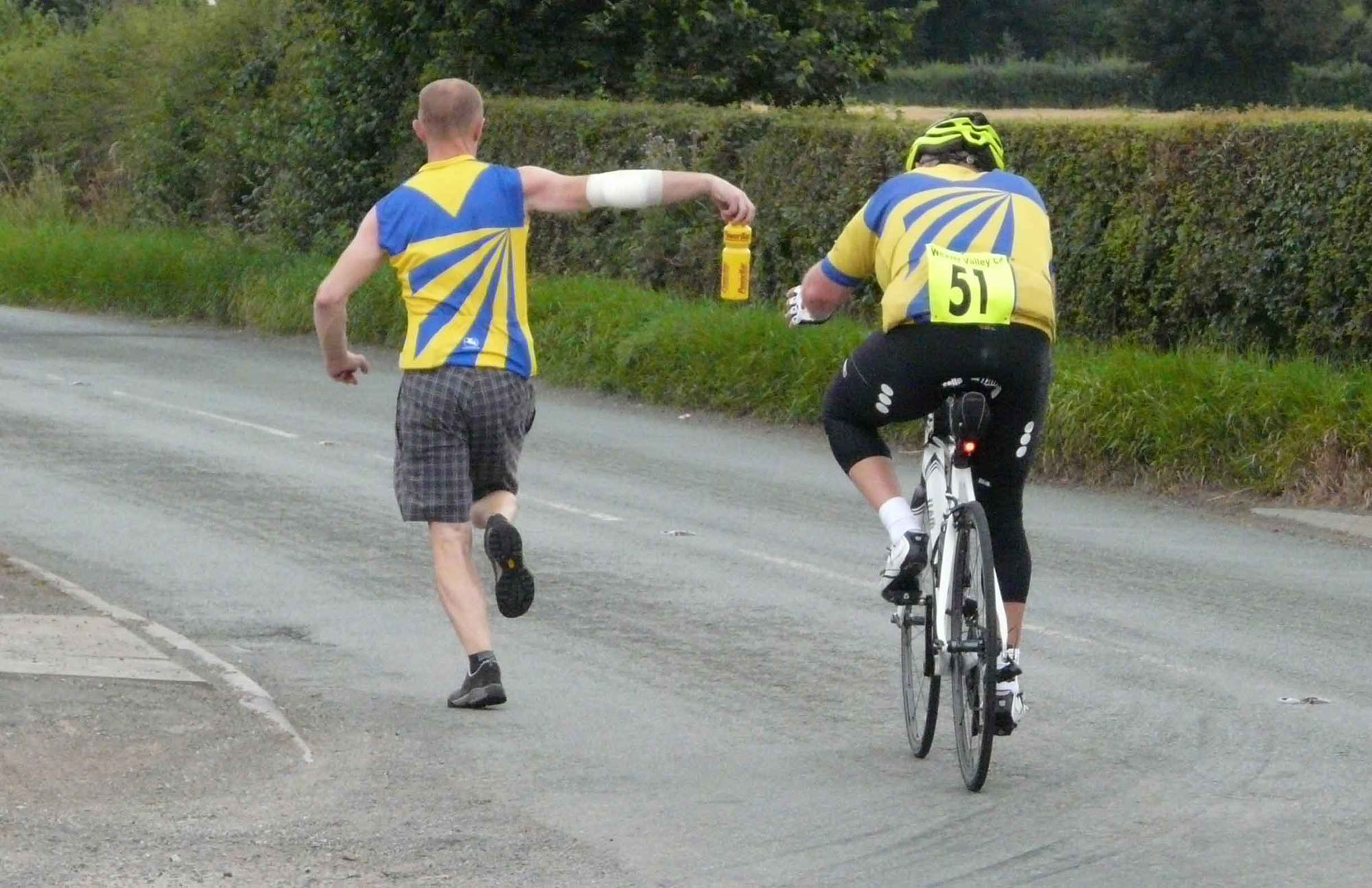 Shortly after, Dave offered me a bottle, which I refused, as I hadn’t started the last one, ‘what’s he offering me a bottle for’ I thought, ‘he’s only passed me this one about 10 mins ago’, he hadn’t, afterwards I found out that he’d passed that one an hour and a quarter before…I hadn’t drunk or eaten in all that time.. FATAL. Dave shouted at me out of the van that I needed to keep drinking! .. I’d sort of gone into auto pilot mode..  I knew it was time to call for an energy/caffeine drink as the road signs had started to sway like trees. Fortunately, I managed to pull things back a bit for the last hour.

On my last full lap of the finishing circuit, Dave leant out of the van at the bottom of the climb that is ‘Alp de Barton’ [a bank that you’d just romp up normally, but after 400 miles it was like riding up Mt Everest] he shouted “last time up this”

But over the top I thought ‘I’m gonna kop for this again’ and I really didn’t want to. 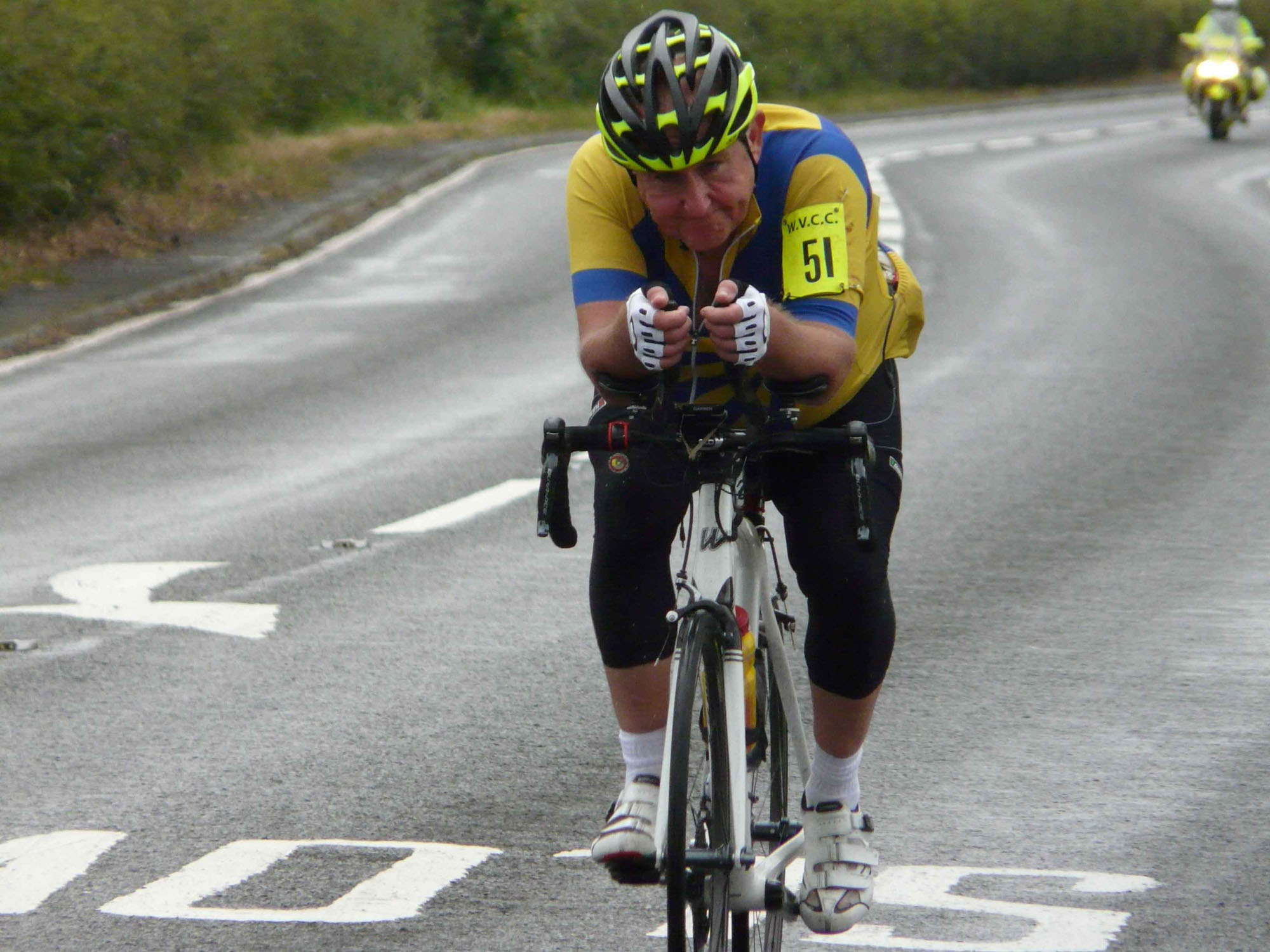 So between TK3 and TK4 I delibarately slowed down so that my time would run out before I got to TK4… I got it wrong by 3 mins.. I could have stopped there, right outside the HQ and waited for my time to run out.. but Dave had got out of the van and was shouting me on, the spectators that had gathered there were all applauding,  on then to TK5 and up the ‘Alp’.. to be fair Dave probably knew I couldn’t resist the call but at the end I was spent, and after Graham helped me off my bike, I just dropped onto the grass verge, not able to support my own weight..I’d managed 200miles in my second 12 hours, keeping my pace even, and although it dropped, it only dropped by a little. 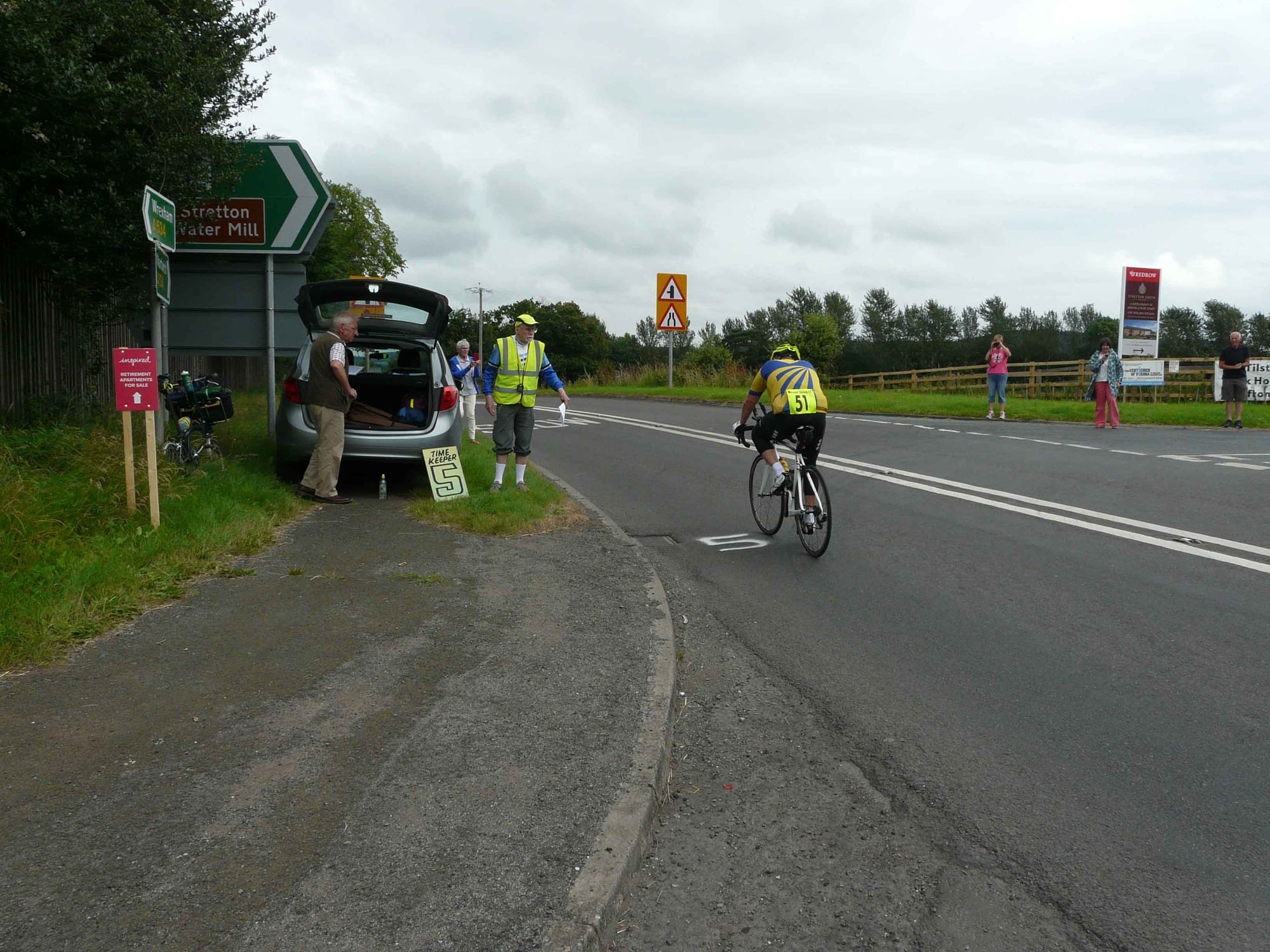 It was so nice to see so many club members on the finishing circuit, giving me a shout really helped me over the 420mile mark.. it was really nice that as well as my support team, Ann and Helen Gregory and Kathy were also there when my time elapsed..I got really emotional.. Glad it was over.. 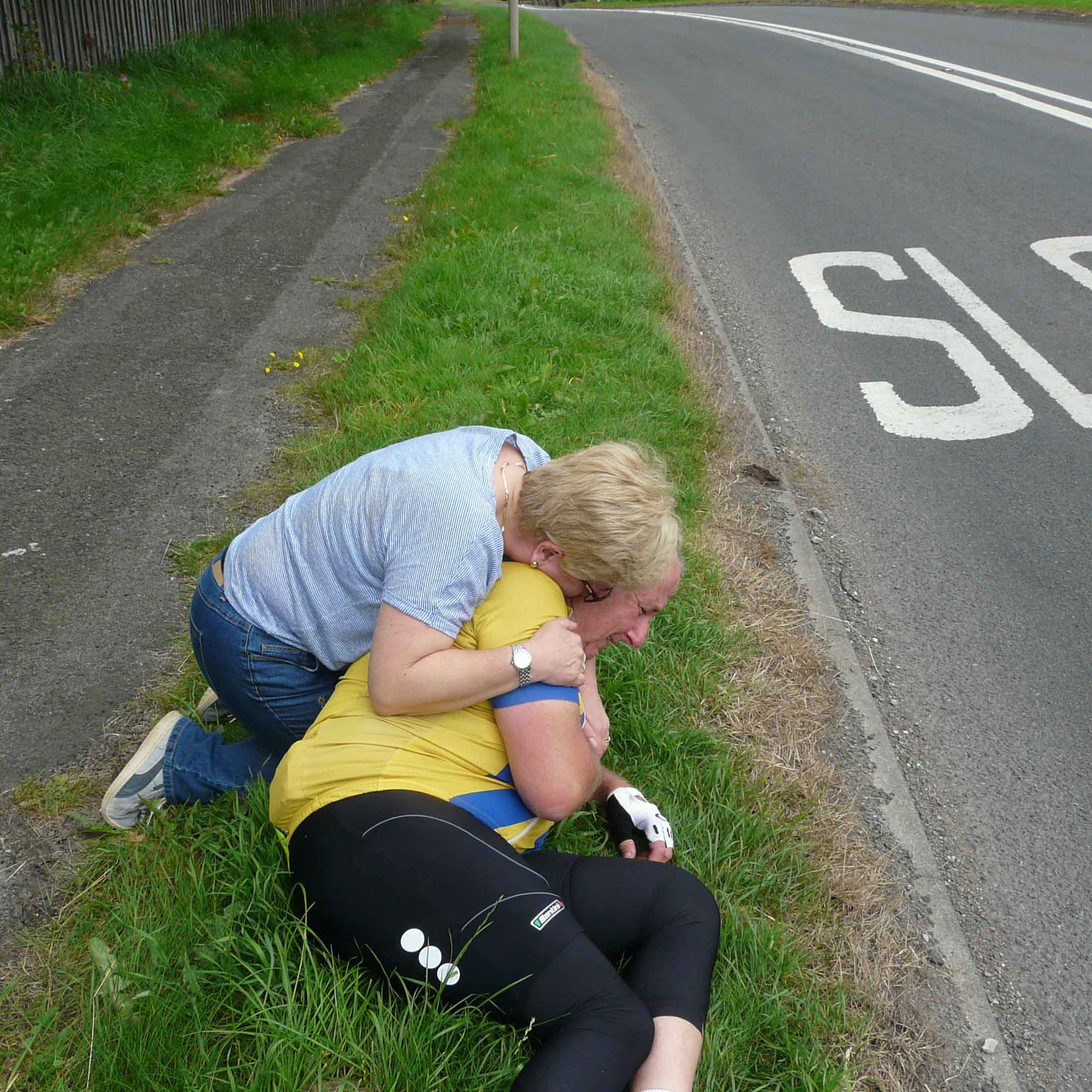 This was something I wanted to do for myself and I felt incredibly selfish in terms of both the hours and hours spent training and the financial cost.

My biggest thank-you goes to my very understanding family, my wife Kathy, [who knows what I’m like] and son Sandy put up with a combination of either, me being out training or early nights for best part of 9 months.  I will always be grateful for them allowing me the time to fulfill a dream..

Little did I realize that so many people were behind me as well.. it was seriously overwhelming and very humbling…2016, 24 box ticked..

Thank you all for your kind words both before and after the event.. this man is a very happy man but humbled man…