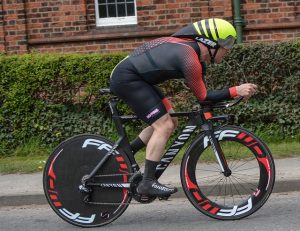 Is it a man or is it a wasp!?  certainly has sting in the tail.

Today was the Manchester District 25 mile championship and as has been the trend this season to date, it was massively oversubscribed with getting on for 200 entries for 120 places.  Fortunately the event was a preference to Manchester DC riders so all of the returned entries were people from other areas.

Weaver Valley had 8 riders taking part which was great to see.  So as is the tradition I’ll post the results in reverse order.  Caroline Fearon rode her first 25 mile TT since her foot injury last August. She got under 30 minutes for a 10 last week for the first time this season so a finish time of 1:15:11 was a very good 20 mph average as similar speed to her 10.  Great ride Caroline.

Dan Robson is now riding open events so should see big improvements as he gets more rides in the bag as 25’s give you confidence to hurt yourself more in 10’s.  His time of 1:06:05 (22.699 mph) was excellent as the wind was grippy in a few places today.

Ben Jones in his first open 25 also produced an excellent PB of 1:04:01 (23.431 mph).  He was clearly well up for a ride as he was furiously warming up on the turbo before the start so he hit the ground running and produced a novice open 25 to be proud of.

Colin Carthy used his recent training miles in Majorca to good effect stopping the clock in 1:03:27 (23.641 mph).  A pretty good average on this undulating and pothole ridden course.

We had some pretty close results today as Chris Gilbertson was next with a 1:03:10 (23.747 mph) just pipping Colin by a few seconds.  It’s early days yet Chris, you’ll be flying by July!

Another new name on the result board was Craig Sephton who knocked out a rapid 1:02:15  smashing though the 24 mph barrier with 24.097 mph average.  Clearly Craig is one to watch as this was a class ride.

I was riding my first 25 of the season but 3 recent 10’s seem to have given me a little bit of pace and that horrible 50 last Saturday helped me to work out how much I could hurt myself for an hour, on my current form.  I rode my favourite 100″ fixed (59 x 16) and the increase in gear of 7″ from last Saturday had the desired effect as I leapfrogged a few riders who stuffed me last week. My time of 59:15 (25.316 mph) was satisfactory and it’s going in the right direction.  That was my 85th sub hour solo 25 since my first one set 37 years ago so hoping to get up to 100 sub hour rides before I get too long in the tooth.  Can’t see it happening in 2017 but it’s something to aim for by 2018 hopefully.  Pity I had 12 years out as a runner, but the change was probably as good as a rest.

Fastest WVCC rider in the championship was a very much on form Alistair Stanway.  He’s been consistently knocking out sub-hour rides for  few seasons now and each year he has improved but he has also had more than his fair share of illness and other set-backs.  An uninterrupted good Winter of training is now paying him back and today he smashed his PB for this modest local 25 course with a superb 57:10 (26.239 mph).  Dennis Hornby told Al last night he needed to up his game as Jim Duffy has stepped up this year.  Seems like Al is doing just that so watch your back Jim:)  If we could only get Jim, Lee, Geoff and Al all riding in the same events on Cheshire we would be regularly taking team prizes, so start comparing racing calendars lads!  You could well have won the area championship team trophy today so take note.

Times today were generally pretty quick and this was reflected by the winning time of 52:36 (28.517 mph) set by Adam Robinson of Vision Racing who beat last year’s winner Dave Crawley by just 4 seconds.  Before the start I was chatting with Dave Crawley and he was telling me how he had not had a good Winter with several periods of illness and he told me he only rode his first interval session of 2017 last week.  I love this sport as it doesn’t matter what level you ride at you can still come up with a good excuse for being rubbish even when you’re not!