Here we are again, same course (Siddington), just a different name over the door, this time Macclesfield Wheelers.

My day didn’t start too good. As most of you know, I am somewhat of an early bird, but on this occasion, I managed to even beat the birds by getting up a ridiculous 1:30 am!! This was made worse with the shocking news coming out of Manchester, my thoughts are with all effected and their families. I had a meeting in Telford in the afternoon which took an hour and half drive. By the time was in a presentation about LED fluorescent lights (oh the joy), I was the proverbial “nodding dog”. I then had a further hour and half drive to reach the HQ for the race. I arrived with at Lower Withington HQ with plenty of time to spare at 5:30, there were no cars there, good I thought, I will just grab 40 winks. 39 winks and about 15 mins later I opened my eyes to see still no cars, Bloody hell, I am at the wrong HQ! I quickly headed to Lower Withington Village hall up the road,  no-one there! Must be Siddington Village hall then, so off I went and sure enough they were all there.

A glorius sunny evening greeted us, I had the usual pre-race chat while getting ready, Kev and Ged arrived to make up the full WVCC contingent as Mark Adshead was unable to make it due to his bad off on Saturday, again I wish him all the best and a speedy recovery.

A short warm up, pre-race brief, race 1 away, 5 mins later, so were we. There were a few of the usual suspects like Andy Turner (Elemental RT), who is the national Champ in Cat B, Andy Bennett (Onimpex Bioracer), John Crook (Liverpool Mercury), but no Si Bridge, Steve Stoneman or Paul Thursfield so the probability that the composition of the break (if one) would be different.

From the gun Turner stretched it out, I was second wheel, I then took the front to try and stretch it further, a small gap opened only for Paul McGowan to drag everyone back, John Crook and another had a couple of goes to get away but with a couple of digs from Bennett we were all back together by Smithy lane for the first time. 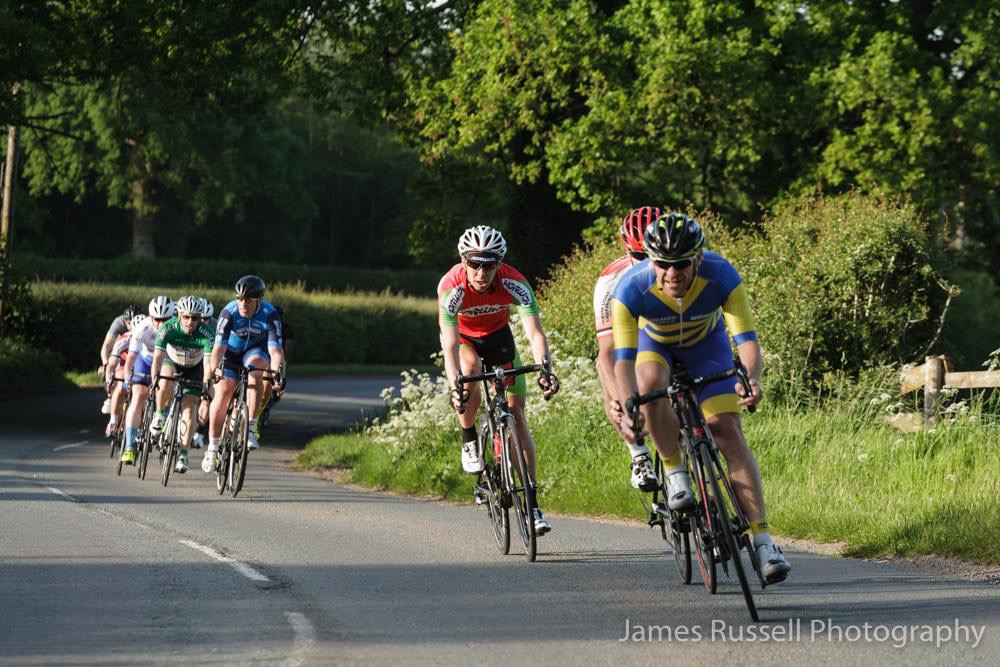 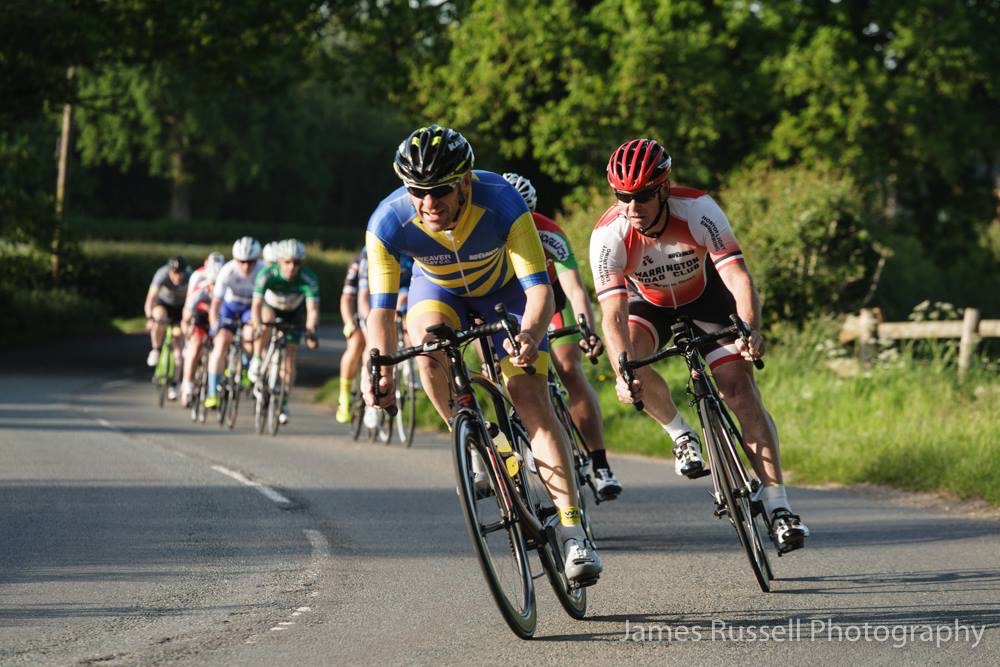 About a mile from crossing the finish for the 1st of 3 times,  McGowan attacked off the front, I sprinted (or should I say went a bit faster as I cant sprint!) to catch him, I rolled through on the front as the draggy rise to the finish line began, McGowan was starting to fade as he couldn’t hold the wheel, I checked over my shoulder to see where the bunch were, they were in a long line as Turner and Bennett put the pressure on, they were soon passing me, dragging a few others, I had to dig deep to hook on. Fortunately, I was close enough to the top of the rise to just get back on.

The break was officially away, it was 8 strong, Duffy, Turner, Bennett, Crook, Martin Harney (Manchester Bicycle Club), Dave Kent (St Helens), Dave Cole & a guy from Pro-Vision. As usual, the work wasn’t being shared out evenly with generally 4 of us working, (Duffy, Turner, Bennett & Harney),  On Trap Street I shouted to the back of the group to do some work, there were complaints “if you slow down, I  will do a bit” & “I have cramp”! 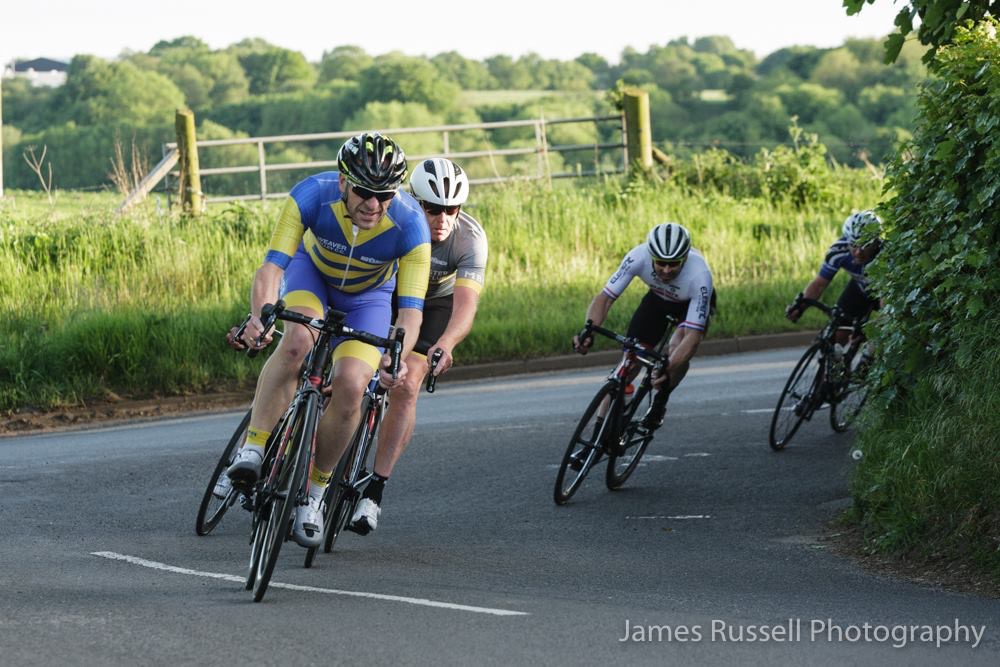 Turner put the hammer down, I followed him, we had a gap, but Harney dragged everyone back,  Bennett took the lead into Smithy Lane,  I was second wheel, 1/2 of the way up the rise, Turner put a bit more pressure on to get to the front, he is going to try and drop the hangers on here I thought, I jumped on his wheel before taking the front, expecting Turner and Bennett to follow. I turned left on to the A34 with about 13 miles to the finish, I had a gap, it was only a few seconds, but I thought they will be here in a minute, I kept the my head down and got as areo as I could. The gap was about 25 seconds as I reach the rise to the finish line for 2nd time, I took the bell, and headed down hill taking a quick look back before turning left off the A34, I could see someone chasing but couldn’t quite see who, the gap was reduced to about 10 seconds,

By now  I was in the windy lanes, the lead extended, out of sight, out of mind again, I kept digging deep, if they catch me  a need to be going fast enough to get on their wheel I thought to myself.  I tried not to keep looking back too much. I turned left into Smith Lane for the last time, reached the top, took a cheeky look back, all clear, yes, I could do this. Back down the A34, down the dip, approaching the brow of the rise, I very nearly had an embarrassing moment when I took a look back while out of the saddle and had a major wobble!! It was all in vein, I couldn’t see anything anyway though as there was a car behind.

On to the last stretch, the road widened up and the cars behind cleared, I could now see I was well clear with no-one in sight, I could now ease up and take a drink before the crossing the line for my second win of the season by about 90 seconds with Turner taking second & Bennett third. The rest of the original breakaway was caught by the bunch. 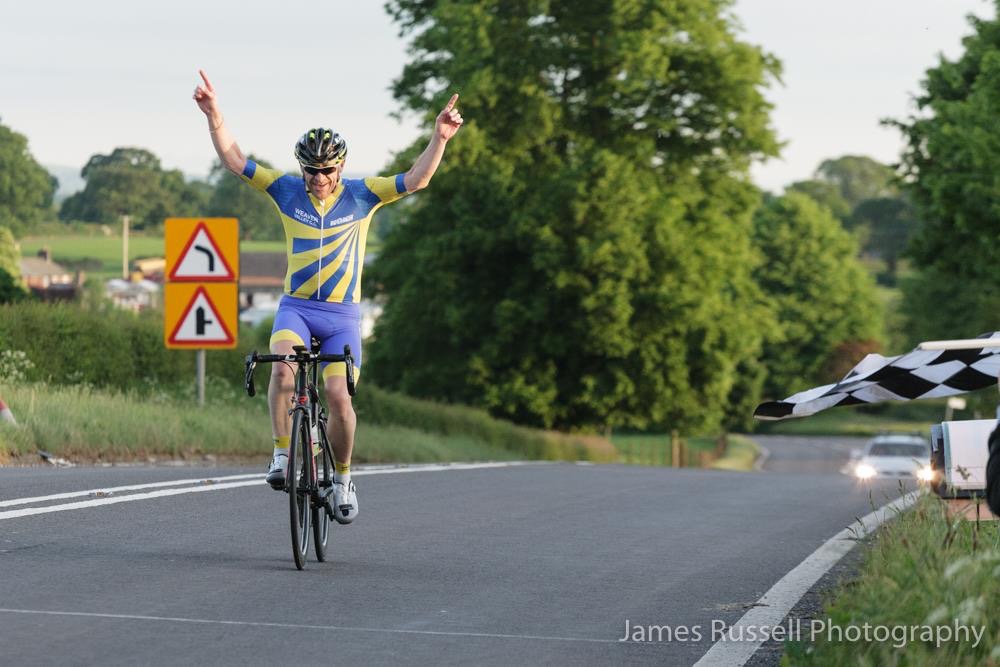 Back at HQ, Andy Bennett was telling me that he and Andy Turner thought they would just roll onto the back of my wheel, he said they got within about 200m but just couldn’t catch me as I just went further away.

Race 1 was won by Steve Fiddler from Matt Langridge and Mark Hassal, Race 3 was won by Keith Jones, Steve Wilkinson second Allan Forrester third. Ged and Kev finished in the bunch with Ged suffering from cramp again in the sprint.

Big thanks to the organisers for another great race.

Next up, Anfield 100 on Bank Holiday Monday.