Due to the expectancy of a low turn out, and the enthusiasm for the riding around the Howgills that was the plan for our away-day this month, we decided defer and just go for a blast round Llandegla forest. OK, so not the epic trek that was planned, but I’ve never come away from Llandegla disappointed in the trip, so not a bad plan B.

There were three others champing at the bit to make a start by the time myself and Giles turned up and after a little delay to deal with an errant car alarm, Andy and Karen Boyle, Steve Cox and the two of us started off on that long grind up to the top of the forest. The Boyles peeled off to ride the Red trail leaving Giles, Steve and myself to blast the black. Steve’s day unfortunately didn’t last much longer due to stripping the thread on his rear QR skewer nut after repairing a puncture, he sensibly opted to roll back down the fire roads rather than risk the wheel falling out.

Which left me and Giles to finish the job. After a while, and a little coaching from me, (pretty presumptuous on my behalf to pass on my wisdom, I’ve largely just developed my own style over the years, not sure if it’s really text-book) Giles had his own eureka moment,

That’ll do for me Giles, I expect it won’t be long before I’m being overtaken by a thundering 29er with the rider hanging on for grim death. 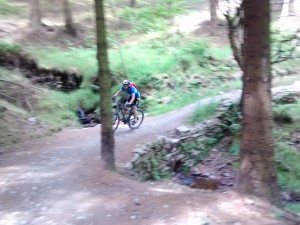 Off Road
Dodleston, the return
Breeze Ride – Picnic at Pickmere