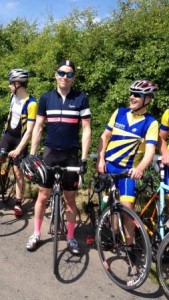 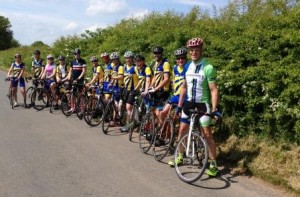 On the Col de Kelsall

A large group was mustered at the Legion this morning, with everyone wanting to make the most of the beautiful weather.  Alan sorted us into three groups, one of which included some new members who’d been persuaded to try WVCC out at the Pedal Power festival last weekend – welcome to them.  I joined the longer ride which was led brilliantly by Jules.  When you’re as slow as me, you appreciate the fact that Jules sets a steady pace up Whitegate Hill!  Nothing worse than being dropped on the first hill with only ten minutes in your legs.  Thanks Jules!  Anyway a brisk pace was set and we rode in orderly fashion out via Winsford (the diversion caused by the closed road at Whitegate ) then Peckforton Castle, Malpas, Bangor on Dee and an extra loop which went goodness knows where but the clue was the signs were in Welsh.  A few riders left us on the way out because they had alternative engagements including young Matt who when admitting he didn’t know the way, was advised to head East.  If only it was as simple as that!  He got home safely we understand but not without the odd false turn – that’s how you get to know your way around I suppose!

Because of our numbers we split for lunch, with some going to the garden centre and some to Hildegaard’s – but Hildegaard came out (in her best pink couture outfit) to explain that she was off to a christening so food was unfortunately off.  At which Jim asked her when she was going to get ready.  Hats off to Hildegaard for taking this with good humour! We still managed with pies, sausage rolls and cakes whilst those who wanted a more healthy diet opted for the nearby Londis.  Tim came back with a baguette and with the sun and all, it felt a bit like we were en France.

Hildegaard wasn’t the only one in a pink outfit.  Kris was taking a brief break from his summer of racing to come out for what he described as a “tootle” with his mates.  It felt far from a tootle to me but hey ho I’m not a cat 2 racer.  He was respledent in Rapha kit with impressive long pink socks and pink stripes on his jersey.  He tried hard not to look hurt when it was pointed out to him that the pink stripe on his cap didn’t quite match.  (You can’t let these cat 2 riders get big headed, can you?!).

And so home, with long and valiant turns on the front from Jules, Jim, Titch and Ewart (who needed the exercise – according to my informant he turned up for the TLI national crit championship in Rhyl yesterday at 9 am not realising his race wasn’t till 3 p.m. – so having waited around all day, he started the race but ended up dropping out because of a mechanical after only 2 miles – oh dear!)  Our return route took an unusual turn when rather than go back the normal way, someone had the bright idea of taking us, with already 70 miles in our legs, up Chapel Lane and over Kelsall Hill.  Andrew and I didn’t appreciate this very much and ground our way up well in the rear, working on our excuses – which if you’re interested, are very impressive.   At the front, I gather Kris and Tim were contending for the hill climbing honour, with Heather’s Dad (sorry Heather’s Dad I can’t remember your name!) mixing it with them too.  And after that – still they wouldn’t let us turn for home: Jim decided he wanted company all the way back to Kingsley at which point Kev and I left the group to go and collect some new club kit from Jim’s garage.  A fabulous ride – thanks to Jules for leading it really well, a perfect example of a steady, well disciplined and enjoyable club run that stayed together the whole way.  With Kev and me on the return leg were Jules, Jim, Andrew R, Paul G, Ewart, Kris, Tim, Rob, Heather + Dad, Jamie and Greg, and turning off at various points on the way were Craig, Matt, Jon C, Goldstraw junior,John Chrystal and Chris G who’d left his phone at the cafe and had to go back for it.  If I’ve left anyone out, apologies. Thanks for a great ride folks!