Four of the gang rolled out to Clitheroe yesterday to take part in what was billed as an on/off road sportive organised by a cracking little Lancastrian bike shop, The Green Jersey.  You might have cottoned onto the term ‘gravel bike’ which is a new  genre of drop-bar bike for light off roading, but a bit more relaxed than a full on Cyclocross racer. This is the type of bike that the ride was designed for but people turned up on a variety of tourers, CX machines and me and Paul Harding on mountain bikes, and everyone was made welcome.

It was an early start, (who knew 6.00 am was actually a thing on Sunday!)  but with the M6 traffic being as empty as I’ve ever seen it we got there in time enough to have a nice cuppa at the HQ before the 8.00 o’clock rider briefing. The shop proudly sports a large Bikes ‘n’ Brews sign in the front window and it’s traditional to start a WVCC MTB ride in a cafe so no need to trawl around the town to find somewhere open was a great start, and we got to look at the really nice stock of Cervelo’s, Genesis, Ridleys and a few other brands into the bargain. 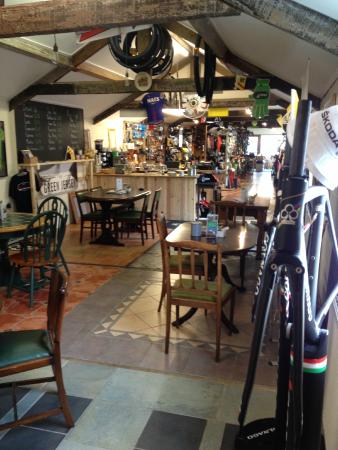 Shorty after the briefing Jim Duffy, Iain Young, Paul Harding and myself all rolled out of the town, and as soon as we left the local streets Jim and Iain opened up the afterburners and that was the last we saw of them all day! Their loss though, as the ballistic pace to Slaidburn 20 miles later, where the feed station provided the most mega flapjacks, meant they were through the village before the caterers got the flag up to signpost the stop and they rode right through.

After Slaidburn the next landmark was a loop through part of the Gisburn Forest mountain bike centre. Unfortunately because the event was aimed at the non MTB bikes it avoided the best features of the trails and looped us through to Tosside at the halfway point of the ride. The forest was also the about the highest altitude and most remote part of the circuit too, but sadly a bit of mist on the hills that we thought may burn off early in the day hung around long enough to obscure any views of the Forest of Bowland and the Ribble Valley. 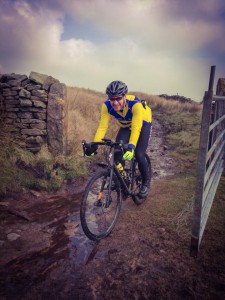 The route was really pleasant then for a good few miles, gradually rolling us down to the busy little towns of Grindleton and Chatburn. Easy. Then all of a sudden not pleasant and not easy. 1000 feet of climbing in just under 5 miles around Pendle Hill was tough. It didn’t last too long though, and then we were onto the most fun, (and most moist) off road section of the day around Sabden.

Paul and myself trundled back down the road into Clitheroe about 2.30 to find out that Jim and Iain had finished the day as quick as they started, doing the whole 56 miles and 6000 feet of climbing in just under the 4 hour time that had been suggested improbable. After another brew and second piece of Flapjack, (it really was that good, I even paid for that bit!) we set off home for the inevitable bike cleaning and arguing over Strava KoM’s on Facebook. Well worth the early start.

Thank’s to Iain and Trip Advisor for the photo’s – I left my phone in the van!

Off Road
do you want to join me in making up a team for the following
2016 . Knowsley Track League….