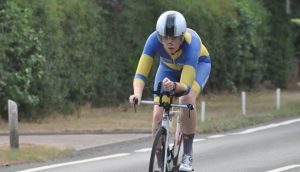 A poor turn out for the Final Fling which is a shame as the club 10’s have been very well attended this Year.  It was a bit windy and cloudy but nobody got wet.  D.James (visitor) won with a 23:56 and best WVCC rider was Emily who capped off a cracking Club TT season with a 24:34 following on from her crit win a few days earlier.  No points tonight which probably explains the poor turn out but we all celebrated the winners at the Crown afterwards.  If you are still hungry for more TT’s this season then it is far from over as open flat TT’s run until the end of September and the Hill Climbs run until mid October.  Most Manchester DC events are on our doorstep in the Goostrey / Holmes Chapel / Chelford / Knutsford area so give them a go.  There is no pressure on the day ass you are riding against yourself just as you are in the club 10’s.  Open events have a HQ where you can view the board, have a brew and some cake and give your excuses to the person stood next to you.  The apres-ride chat is what it’s all about!

Final results of the Guardian Cup and Scratch competitions will be posted shortly.  see you next April for next Year’s club 10’s and thanks to Ann, Graham, Jimmy and anybody else who helped to run these events and to all of the riders for taking part.

Track cycling. The perfect opportunity to get some excellent training and experience with the club. We have a British Cycling coach that will train you and give you probably the best 2 hour workout you’ve[...]
View Calendar
Add