This first 50 of the Year in Cheshire has an amazing history.  It has been held every Year since 1928 and the Dukinfield Cyclists’ Club which is one of the oldest clubs in Britain was already 43 years old that year.  That first event was won by W.Ward of the Stretford Wheelers with a time of 2:14:22.  Things have changed a little since then and indeed for the 2017 edition of the race this finish time would have earned Mr Ward 79th place from 100 finishers!  I can’t remember the last time we had a full field for a 50 on Cheshire apart from National Champs so the trend seen so far this year in the shorter time trials of much higher entries, continues at the middle distance.

Weaver Valley CC had 5 entrants with Andy Newby kicking off the full field of 120 riders in pole position.  Andy was enthusiastically supported at the road side by his wife and little boys so we may enjoy watching a third generation of cycling Newby’s competing at the 2038 Olympics!  Andy seemed to enjoy his ride and was spotted pulling up for a photo shoot mid-race with his family.  Living proof that there is more to racing that haring around trying to beat PB’s.  Andy stopped his clock at 2:26:40 (20.455 mph ave.) so he managed to beat evens (20 mph), despite stopping for his photo shoot.

Jim Williams was next to start but decided before half distance to call it a day as his backside was getting more and more painful.  Only when he returned to the HQ did he realize that his saddle had slipped and was pointing down by about 20 degrees.  It was just as well it didn’t slip the other way or it may have been necessary to extract him from his mount and that would have brought tears to his eyes!

Next to go was yours truly.  My first open event of the season last weekend was a 10 so a 50 for my second was always going to be a bit of a shock to the system.  I selected a gear of 94″ fixed (59 x 17).  The gear felt good and was turning quite nicely but due to lack of any sort of speed training and not many miles before my recent Majorca holiday, I was riding very conservatively.  25 miles passed in 1:02:20 and I felt good, but with 8 miles to go I was running out of steam.  Fortunately the last 5 miles was tailwind assisted so I didn’t lose too much time but by the finish I was stuffed.  I was pleased with my time of 2:06:54 (23.641 mph) considering my lack of form, but my placing of 47th was probably one of my worst placings for decades in a 50.  It was a reasonable time though and definitely something to build on at this early stage in the season.

Alistair Stanway was next and he was happy with his ride, producing a pretty level paced ride.  He went through 25 miles in a 1:00:? and his final time was 2:01:22 (24.718 mph).  Anybody who has ridden a club-run at a steady 20 mph average will know that evens is a very brisk pace in a bunch but try averaging just under 25 mph for 2 hours on your own, quite an achievement.  Nice ride Al taking 27th overall in a good field.

Finally off at no 108 was Geoff Mullett and I was expecting great things from this very strong and very keen Triathlete.  Triathletes benefit from the cross training effect due to the nature of their multi-discipline sport.  Not only do the 3 sports enable excellent cardio-vascular training, they also develop much stronger upper body and core strength than most cyclists have.  Geoff powered past me when I had 5 miles to go, by which point my legs had well and truly gone.  He was past and out of site in minutes and judging by his final time he didn’t fade towards the end.  His finish time of 1:57:48 (25.467 mph) was good enough for 13th pace overall and he was in the company of several top riders.  Nice one Geoff and ride a few more as you can only get quicker with practice.

The race was won by Charles Taylor of Team Bottrill with a 28.311 mph average speed on our very lumpy and not so well surfaced Cheshire roads.  His time was 1:45:58.  Charles is one of the best and is the current holder of the 100 mile National competition record with and incredible 3:21:31 (29.774 mph) …. what a rider! 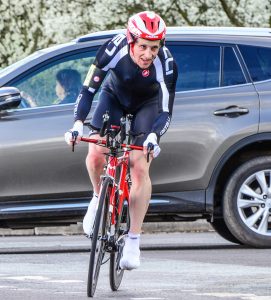 WVCC Club 10s 2021 – Guardian Cup Round 2 – WVCC members only For experienced and new club riders alike, just come along and have a go. It’s all about you and the clock,[...]
View Calendar
Add