Derek 15th in Tour of Britain in PB

How can this be? I hear you cry. He is always at the back, has mudguards and a saddle bag containing a bike shop set of tools and spares. 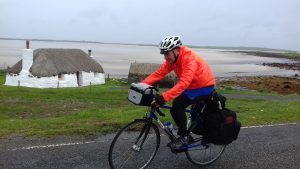 This Tour started back in the winter of 2001-2. A change of jobs took me away from my involvement men’s lacrosse (Who knew that?).I had turned to the bike to keep fit, was looking to vary my routes, when an article in Cycle, the CTC quarterly magazine, announced the launch of The British Cycle Quest (BCQ). The Quest was to visit, by bike, 402 places spread across the mainland of England, Scotland, Wales and the large islands of Shetland, Orkney, Western Isles, Isle of Man, Anglesey and the Isle of Wight. These places being organised by county and each county has 6. I think the nearest equivalent would be the hillwalking challenge of walking the Scottish Munros.

The latent train spotter in me was aroused and the first ride of the odyssey took place on 9/2/2002 and went from home to Styal and Knutsford. How do I know? That train spotter, pre Strava and Garmin, has his notebook!

The early years required riding to fit in around a young family so were restricted to weekends and odd days out in the holidays. Clearly it was straightforward to visit local sites in Cheshire, Greater Manchester and Merseyside but very soon places became more of a challenge.

Munro baggers would not walk from home to each peak so I decided I could use other modes of transport to close in on a control. In order to meet the requirement of visiting each place by bike, however, I eventually imposed a rule of a minimum ride of 20 miles to a checkpoint.

The first county completed was Cheshire. Despite being the nearest this took a year. By the end of 2003 I had manged to add Perth and Kinross, Stirling and Clackmananshire (Scotland was featuring in family holidays) Denbigh and Merseyside.

Over the following seven years I seemed to average around 20 places visited. During that time I adopted a more strategic approach. I had discovered audax and would pick events that allowed minor diversions to collect BCQ points and still have time to complete within the time limits. I diverted off my End to End and during the London Edinburgh London 1400km event. In addition, I recognised the benefits of looking at neighbouring counties rather than one in isolation. The disaster that struck in 2010 ruined that year and half of 2011.  Eventually I reached the halfway point of 201 sites by visiting Loch Doon in Ayrshire on 12/7/12 (That notebook again!).

Once halfway had been attained motivation was lifted, more in the bag than to collect. I started working part time, the children were no longer taxi dependent and that light at the end of the tunnel became more of a focus. The remaining places became a reason for a holiday, or to accompany my wife, Alison, when she was working in an area on my ever shortening list.

2014 was the most successful year, in terms of points ticked off.

The last 3 years have required trips which involved significant planning but have probably provided some of the best riding. Shetland and Orkney isn’t everyone’s idea of a “summer” holiday and I am sure the Western Isles do get sun sometimes – just not when we were there.

Apart from the satisfaction of having ridden “everywhere” there are a few landmark memories which, for me, is the joy of this challenge.

I would never have discovered the great riding to be had in the South Downs and on the Isle of Wight but for this. Neither would I have had the thought “Why the **** am I riding in Trafalgar Square?”  The best places have to be the viewpoints above Machynlleth and Glen Prosen, maybe it was the weather on those days. Shetland had superb road surfaces (not a pothole in sight).

The final point visited was The Falls of Rogie, in the Highlands, where 2 salmon leapt upstream to acknowledge my completion of the BCQ on 28/6/17.

Now for the note book statistics for the competitive amongst you

It has been confirmed by Cycling UK I am the 15th to finish.

Maximum ride to a control: 392.35 miles to Langholm, Dumfries, during LEL audax

Minimum ride: 4.8miles to Heckington, Lincs – bit too close to a travelodge