The first Saturday of February offered us mountain bikers near perfect conditions for our traditional Delamere local ride. Given the lack of rain we’ve had over the last couple of weeks the trails definitely lacked the “quagmire” label that they often attract over the winter months, and where the damp did remain for the most part the cold weather meant firm tyre feedback rather than the usual slippery progress.

There were other signs of change today too. Wagon wheeler 29″ mountain bikes outnumbered the traditionalist 26er and we didn’t pause at the cafe for a brew before heading out to the forest and novel permutations of old favorite and new exciting paths. Our meandering way eventually led us out of the trees at Waterloo Gate, near Kingswood Park, first to the roads then some lesser travelled Sandstone lanes, eventually arriving at the hill fort on Woodhouse Hill. From here we were sharing the tracks and paths of the Sandstone Trail with friendly walkers and their dogs until we arrived at the Frodsham War Memorial. Unfortunately the clear skies had not persisted from the early morning, so we were denied the usual views of the Peak District and beyond, our vista limited to industrial Runcorn, Warrington and not much further. 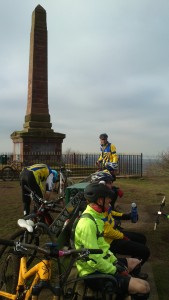 This was the furthest point of the trip, so taking different paths back towards Overton we found ourselves back in Delamere, to the Station Cafe, tea and dinner. Thankfully there will always be this consistent point of reference to our local rides. 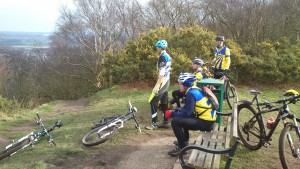 Off Road
delamere mountain bike
WVCC in the running for Decathlon Cycling Club of the Year!
Cramming for Llanberis…