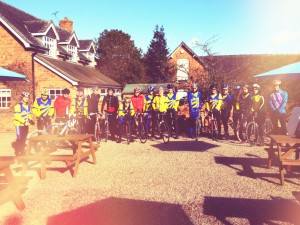 Well the week long wait and the daily grind at work is all worth while when you have a club run like today. Despite a chilly, and in some cases according to the Winsford division, a slippery start to the morning, the sun was out in full force and by the return ride home the roads were bone dry and the temperature just right.

A good crowd rolled up at the British Legion and split into two comfortable groups both destined for Dagfields, a nice easy flat ride in preparation for Llanberis next weekend. The long group did a long loop while the short ride, to allow the roads to clear up, went direct through Middlewich, Warmingham, edging on Crewe and then into Haslington.

Talk was all about Llanberis next weekend with Rich Munro signing up members for his Grupetto. Steve Thomas made a special guest appearance, sitting on the front, keeping tempo. We encountered a couple of slushy sections but apart from that the roads were fine.

After great service and food we headed back home as the long group arrived to take our place. We were joined by Kevan, who in advance of hearing of an epic Whitegate clash of the titans, skipped lunch to head back home. The route back home went through Audlem, before taking in an never ending road up (avec headwind) into Nantwich, Wettenhall, Winsford and into Northwich.

Once again Steve Thomas sat on the front and drove home the bunch; with already a very good 40 miles in the legs some riders were starting to feel it and the bunch became splintered. After a quick re-group, the tempo dropped back and those still finding their legs for the 2012 season were nursed back home.

Meanwhile at the head of the bunch, a breakaway had formed. I can’t remember everyone unfortunately but it did contain Kev, Pete, Graham Gregory and would you believe it Steve Thomas. Crowds gathered from as far as those exiting the church and midway up the climb Pete attacked. Wood and Underhill had the legs to follow. Wood sat behind, eyes fixed on the wheel in front. He could see a shadow behind him and knew he wasn’t alone. Wood could see the bridge before him. So many have won here, great names: Armstrong, Wiggins, Evans, Schleck and Dave McKay. Then Underhill attacked, Wood knew it was too soon to go but followed his wheel. Underhill, out of the saddle, surged forth. Wood followed. Wood’s heart monitor screamed for him to stop or you will die, and then Pete came through. Wood knew it was over. Who won? I don’t know, I didn’t see. I could just about roll over the bridge.

We re-grouped after the bridge and headed home. I had 60 miles on the clock when I rolled in. A great day, great weather, brilliant company and cheers to Al for the route. See you at 8am Saturday for Llanberis! 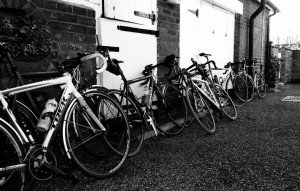 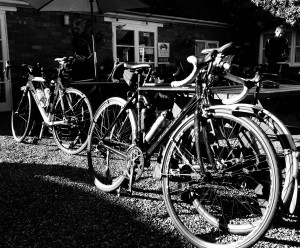 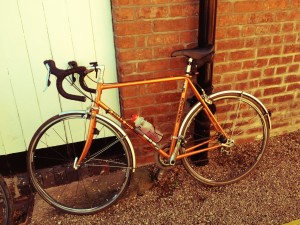