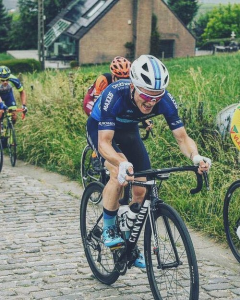 The popular 2-up was well supported last night and the conditions were also good. Probably for the first time ever the winning team was a mixed team with Emily and Sam putting out a scorching 22:47.  2nd team were Paul Longley and Dave Jones who were also fastest composite team with a time of 23:20.  3rd overall and quickest male WVCC team were Andy Milligan and John O’Mara with a 23:41.  All teams got well under evens (20 MPH) so I guess that the pairings gelled well and didn’t beat each other up as often happens in TTT’s.

Fastest Solo was our local Pro and WVCC rider Matt Nowell of Saint Piran, who was slightly disappointed with his 20:53 taking the solo win by 1:21 from Dave Walker who also did a rapid ride.  Matt crashed in a Pro race a few days ago and lost 4 teeth so personally I don’t think he had anything to be disappointed about.  My only suggestion for a faster ride Matt is go back to fixed wheel and use you track cadence, but then I would say that wouldn’t I:)

For those riding the Janus 25 on Saturday which is the club 25 mile championship, best of luck and fingers crossed that the 45 MPH wind and heavy rain have passed by then!!