As it is the shortest fixed distance the 10 is usually the most popular and therefore the most hotly contested of our championships.  Last night there were a lot of missing faces but nevertheless we still had 13 Weaver Valley riders and this was supplemented by 8 riders from other clubs.  My old club the Nova CC has no racing members these days although they are still a very active touring club.  4 of the Nova riders contested their first club 10 champs for quite a few years with 2 of them novices and the other two coming out of retirement after a 20 odd year lay off.  More about their results later.

We had 3 ladies competing last night and Emily Martin who seems to finding some form of late, did a cracking ride, stopping the clock at 26:05 with Alison Morton second quickest WVCC lady with a 30:42 and Claire Thompson of the Congleton CC completing a WVCC sandwich with a 28:59.

The 3 WVCC medalists were; Bronze – Craig Sephton (24:31), Silver – Dave Fearon (23:59) and congratulations to Jim Duffy taking his 3rd championship win of the season with an excellent 22:29.

Our local Olympic rowing gold medalist Matt Langridge is definitely mastering the art of racing whilst facing forwards as he produced an incredible course record of 20:51 on a good but not super fast evening.  Is there no end to this man’s talents!?  Another local super tester (sorry Simon, I meant cyclist), Simon Bridge also made the Col de Mangoletsi look easy with a 21:17 taking second fastest on the night.

The Nova championship produced some interesting results. It goes without saying that the man on 92″ fixed (Bryce Ashworth) won with a 26:47.  He had never used tri-bars before or a disc wheel (bike borrowed from a mate) and he found the tri-bars hard to get on with so rode on the drops.  Great ride though after a 25 year lay off.  Rob Brownlow was second and as a novice produced a cracking effort with 29:13 narrowly beating Steve Hindley who also hasn’t raced for 25 years but managed a 29:27.  Steve used to work with Jim Duffy and was mightily impressed by the transformation in 5 short years!  John Martin completed the Nova riders and enjoyed the experience as a novice clocking a very respectable  30:39.  The TT bug definitely nibbled a bit on John as he said he felt that he could have gone quicker and wouldn’t mind trying another one to see what he can really do.  Remember that feeling Jim D?

No Guardian Cup points this week but Round 8 next week so make sure you ride as only 3 rounds left to get your points. 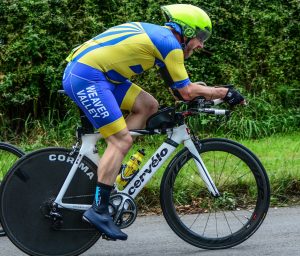