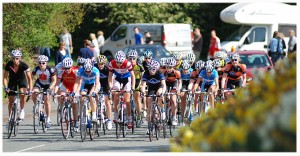 At Weaver Valley CC we promote a number of races through out the season, the first of which is the Cheshire Classic Women’s Road Race which takes place on Sunday 22nd April, starting at 10am.

The race is part of British Cycling’s National Series calendar and is the longest race on it too. The race sees the UK’s top riders compete and previous winners include Lizzie Armitstead, Nicole Cooke, Junior World Champion Lucy Garner and we’ve also had a World Champion clad Mandy Jones on the start line back in the 80s too!

The race takes place on the Weaverham – Acton Bridge circuit where riders complete 10 laps of the 7.7km lap which includes the infamous hill on Acton Lane.

This year we have been fortunate to gain 3 new sponsors in the form of LightboxUK, Epic Cycles and Dave Hinde Racing. Thanks to them we have added 3 major new elements to the race including National Escort Group and Paramedic support, an intermediate sprint to celebrate our 50th anniversary at the end of lap 5 and we are delighted to have over £1000 worth of prize money available.

We have secured an increased field of 70 riders for this year’s race, of which we received over 80 entries. This year we have a dedicated website where you can view the lineup and view the circuit and also for you Social Media junkies, a Twitter feed too.

But a big thank you needs to go to Terry Veal. This race sees Terry retire from promoting the race (not fully though I hope at least for the first year) Terry has promoted road races for over 40 years, and has successfully built up the Cheshire Classic as a race we as a club can be incredibly proud of. Thanks Terry and all the best.