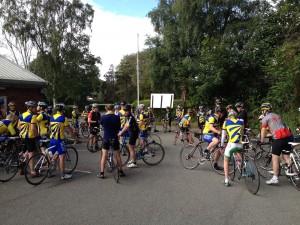 A great turnout at the Legion this morning

Well what a day! Ever since Al started running the Charity Ride a few years ago the focus was on getting families and new riders involved for the day on a easy paced ride. Previous rides have seen Andy Beswick charge up Chapel Lane on his mountain bike with the youngest in his bike seat. For the fittest amongst us, it’s a chance to stretch the legs and show peak season form in a hill climb and intermediate sprint.

It was an incredible turn out at the Legion this morning. 50 riders rolled up which included sons, Dads, wives and girlfriends who were out with the club for the very first time. It showed the true character of the ride.

Bibs in jersey pockets, we all rolled out through Weaverham up into Acton Bridge and on to the first climb of the day. Al had spoken about the faster riders doing a longer loop but I don’t think anyone had that in mind. Today was all about sticking together, re-grouping often and supporting everyone along. It was a strange day, normally 2 miles into the ride you are either nearly knocked off by a car or have projectile verbal abuse thrown at you. Today it was different and it was great to see everyone winding along to the ice cream farm.

Legs now warmed up, a select bunch brokeaway from the peloton to take on the climb up Chapel Lane to Summertrees. As the group headed towards the start of the climb there was much looking around. Young James Risk, having returned from holiday in Canada especially for the day, sought help from his companions not knowing where bookies favourite Kris Zentek was. At this point, no-one seemed to know.

Wood and Jim Duffy set the pace up the first part of the climb but almost immediately Titch attacked. Surely it was too early but Risk followed. But where was Zentek? Eventually he came past with a number of riders on his wheel including Fast Lee and Jon Conboy. Spanish Jed, fresh from last week’s antics was also in the mix but was soon following Ady Japp for the final part of the climb.

Now you won’t be surprised to hear that I wasn’t around when the final sprint took place but I’m reliably informed that three quarters the way up the climb, Titch attacked taking Zentek and Risk with him. Zentek in great late season form rode on Titch’s wheel, waiting until Titch was recovering and then attacked to beat Risk and to pick up Guide Dogs for the Blind Charity Ride King Of The Mountains 2012. I tried to get comment at the finish but an inconsolable Kris just about blurted out “best moment of my life”.

Once re-grouped we headed over towards the Ice Cream Farm through Waverton. Waverton was to be the next big stage of the day. The Intermediate Sprint stage is always one to watch out for. It always makes people jumpy, every single year people commit way too early (normally just down from the right hand turn into the junction) and this year was once again no acception. Youngsters Titch and Risk went early, they were then followed by a number of other riders and before long it was a case of committing before losing the break. After a slam of 1 mile up the road, everyone slowed up for a mile before winding it up for the sprint again. This year it was a case of choosing which wheel to follow. I chose in-form Kris Zentek and it worked out well, I went 200 metres out but unfortunately being an idiot and not managing to get on the drops meant I was always in a weak position, this then meant James Risk got a nice lead out to take the win.

We re-grouped at the crossroads before the Ice Cream Farm and once bibs were put on we did a lap around Tattenhall to arrive at the Ice Cream Farm. I believe Al Silver took a well deserved sprint to the cafe! (Comment from Ady: it should be noted, that as we approached the Ice Cream Farm, Al sneakily shot off the front, in a move that you may only have credited Denis Menchov with! Mr Silver, you are the Silent Assassin of WVCC!!)

It was mad to see so many people at the cafe this year, and even a posh new van as well. Each year it just seems to grow and grow. Photos taken, it was beans on toast time!

After beans on toast it was the obligatory bash home from the Ice Cream Farm. Safe to say I’m now totally exhausted especially after my 10 on Saturday! It was a frantic pace all the way home. James Risk and a grinning Graham Gregory blaming an uphill attack on an exhausted Wood on “keeping cadence” while John Keen got involved towards Oulton Park, pushing the bunch along so much that the car we caught up with had to pull over. Covering 10 miles, 10 minutes later, the contest up Whitegate Hill saw Titch and Risk attack on the downhill but fail to fully commit. This meant that Ady Japp and Spanish Jed soon caught them up. Japp took to the front and set a destructive pace. Japp faded, Spanish Jed took to the front who then also faded, finally Wood then attacked in return and then faded too before Titch took the sprint for the sign on the bypass bridge over Risk.

It was a great day out on the bike. The sun shone on us all day long and the turnout was fantastic.

I’m pleased to report altogether £834 was raised for the Blind Dogs with a massive…and I mean massive..£454 raised by Weaver Valley alone. A great effort and thanks to Al for organising it all. 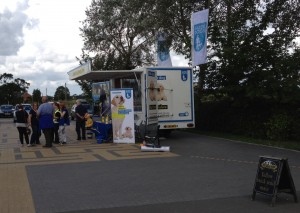 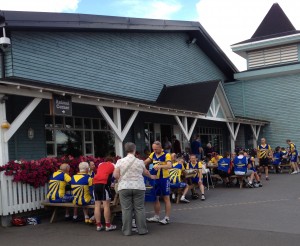 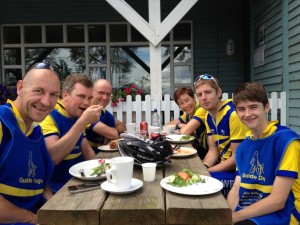 Great ride from Carol's Jake on his first ride 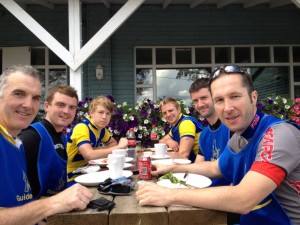 Good to see Jack and friend out this week 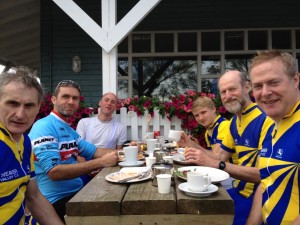 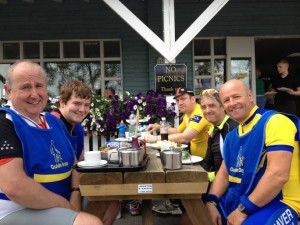 Andy Williams did very well on his first ride out 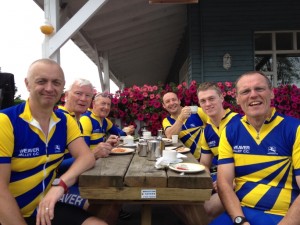 Al looking chuffed and deservedly so! 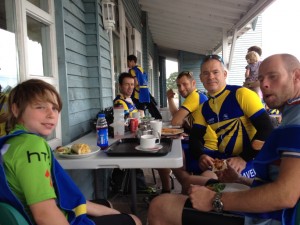 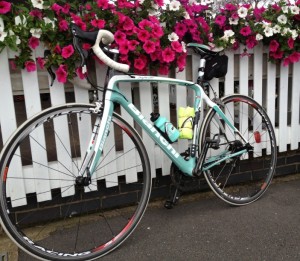 This Italian stalion deserved it's own space. Check the branded bidon. 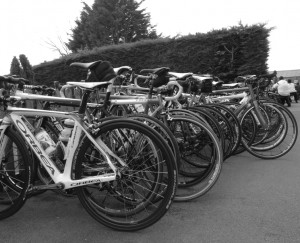 Anyone want a bike?

A great turnout, and a worthy cause.