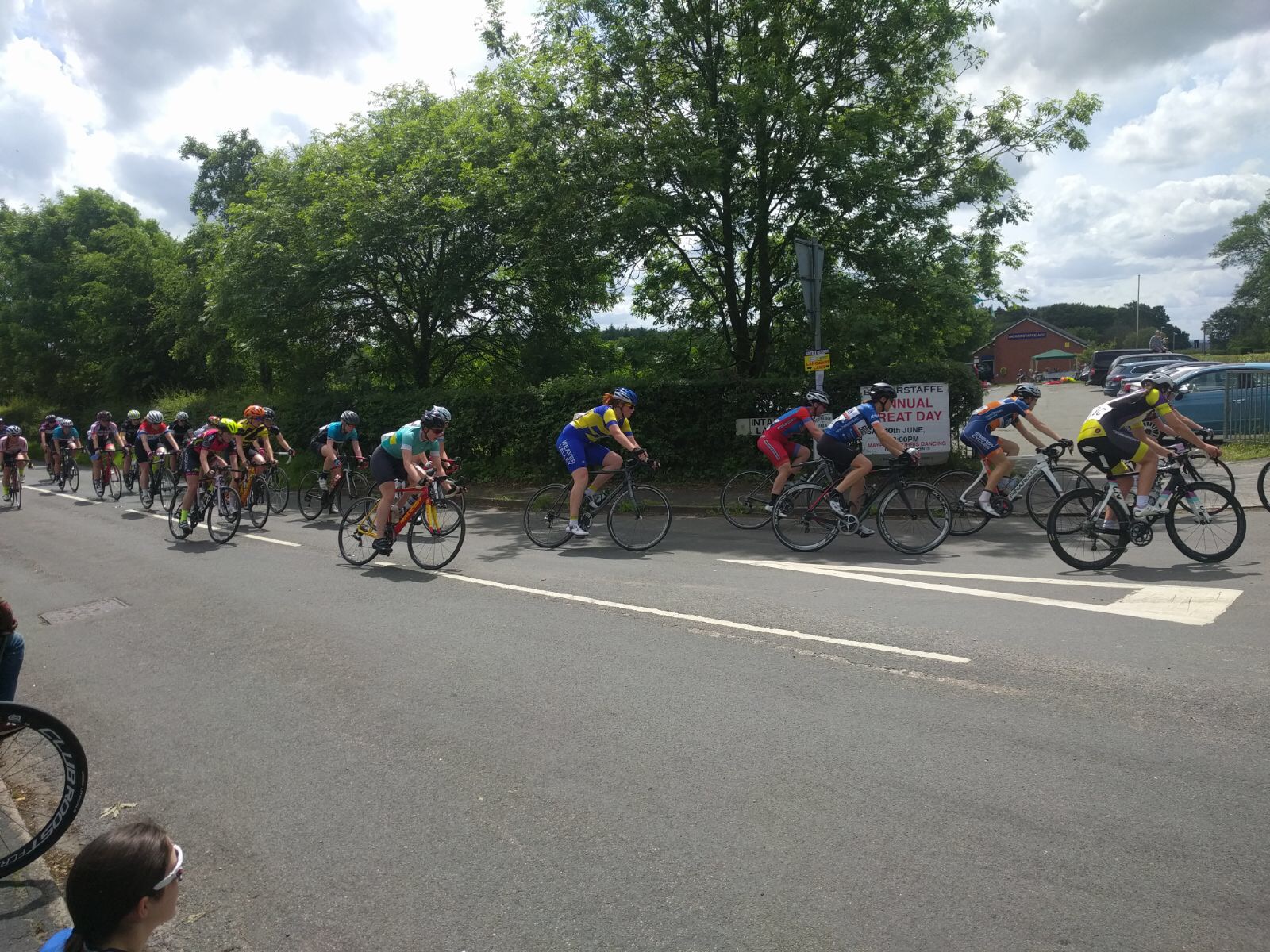 I’m home, showered and sunburned after my first real crack at a road race, so with beef hula hoops in hand I thought I’d write a blog – not least because I promised Mr Geoff Lovelady that I’d provide a summary.

I entered Bickerstaffe several months ago whilst planning out my year of TTs, after seeing the race on the Racing Change Foundation recommended list and noting that it was cat 3/4 only. I figured that the flat circuit would suit me, so for a first road race (after trying a short crit last year) it seemed fitting; though after not getting the miles in or training as I’d like, I really wasn’t sure how I’d do at all. I set off nice and early this morning so I’d have time to get ready, and picked my Dad up on the way as I knew he’d enjoy watching and having a shout from the sidelines. Plus at 14 laps of the circuit, (totalling a 39mile race distance), he’d get to see us race past multiple times and therefore have a yell at me 14 times J

As a first time in a bigger road bunch, I knew today would be a series of lessons to be learned about how to move around, position myself, think, eat, attack and everything else possible. The first lesson learned is that I am no Jim Duffy – so anything I say in the next few paragraphs will be devoid of names, teams, accurate lap numbers or data…sorry! (and Jim I really don’t know how you keep all that in your head)

Bickerstaffe is a simple box circuit which began with a rolling start down the descent part of the course on Hall Lane, then left onto more false flat descent, two more left hand corners then more rolling road to the T junction at the end of Ben Lane, then left onto Intake Lane which had a bit of everything, though mostly uphill and with the finish line half way up. Then back up a gentle slope to back to the HQ corner and left again back to the descent.

I noticed straight away on the first lap that I was finding the flats and descents much easier than most, which was definitely because I was easily the biggest! Then on the uphill if I chose a wheel it was easy to stick in place and not to end up down the pecking order; so I used this to my advantage, moving up the bunch on every bit of downhill; then sitting in when we looped back to the uphill, which meant by lap 3 I hit the front and managed to stick a dig in down the descent and string things out a bit, but (and as was a theme of the race) there was little rolling through and working together to keep things quick, so after a while I eased off completely because I wasn’t about to batter myself for everyone else. I also noticed that most were taking all but the last HQ corner (which was uphill) slower than I thought necessary, so for each turn I tried to position myself on the outside, brake later, carry more speed though, put in a few hard turns and find myself 3 bike lengths further up in the bunch. I’m going to thank my silly post-club run descending of Bag Lane for helping me judge those!

On about lap 5 on the uphill to the HQ, I heard the clink of a wheel touching another behind me, heard yell then the not so nice sound of one of the girls behind hitting the deck. I kept going without looking back, but I know two retired and that a few who were caught behind it couldn’t get back on after which is a shame.

On lap six, I hit the front again and put another dig in down the flat and created myself a little gap, but after turning left onto Intake Lane I was hurting on the uphill so sat up as I knew it was too early and I was too unfit/tingling with hamstring cramps (which nagged at me all race in the end) to really make a crack of a break – but DDDUUUHHH – it was prime lap 6, so I should have carried on, gone for the prime THEN sat up, so having slowed I’d basically led it out. Another lesson…count laps!

As the laps racked up, I was staying up within the first 8 or so riders, moving about steadily and managing to eat and drink, however it was clear there was never going to be a decent break of a good few of us – which is what it would take to stay away. I managed to close down a few attacks and do my bit, and laughed to myself at one point because I closed a rider down, but left her out front dangling for a bit because it was clear we were going to get her; then some other riders I hadn’t seen much of put their digs in anyway – which felt a bit daft, as they weren’t countering, just making up another 5 metres. Anyway, after spending my time staying up, controlling myself and working, the effort started to feel a bit pointless as we wouldn’t get away, so I started keeping wheels and saving myself a bit more.

2 laps to go and a rider who I hadn’t seen at all race sprinted up the outside on the uphill and suddenly we had a rider away with about ten seconds! So a lot of shuffling and turns of speed began to catch her, but with the same people pushing as ever the gap wasn’t about to close anytime soon. Down the descent and I thought “sod it, I’ll see if I can catch her and we can work together for the last lap” and bombed off down the right hand side to try my luck. After a few seconds I looked back and low and behold – my caravan sized shadow and I has taken the whole bloody bunch with us, so there went that idea! Over the finish line and onto the last lap and the rider (who would go on to win the most aggressive prize) still had a 10s gap, but with a push to get round to the finish we were reeling her in, and onto Ben Lane her escape was over.

Now, as I said earlier, I had been using corners to my advantage and making up spaces on the outside on each turn, so I continued to do this as we sped to the finish. However, into the last T junction at the end of Ben Lane…and I completely cocked it up! Found myself on the inside, 2 gears too high to accelerate out and BAM, two bike lengths lost, boxed in and heading to the sprint with no space. Five riders who hadn’t amateur-houred the corner were ahead and the winner would be chosen from them. Trapped in I managed to sprint up a few places on the inside and duck under the chequered flag, but I’ve no idea of my finish place. For a first try, I’m just pleased that I managed to stay on, work and do my bit and finish fairly strongly, though disappointed I couldn’t have a full crack at a sprint, because I don’t really know if I’m much of a sprinter or not…and still don’t! So I might get a “don’t do the whole race then blow it on the last corner” sticker for my top tube and try again next time.

Again, apologies for the lack of detail, but I can say that the race was won by a rider from WNT and I was really pleased for her as she’d also been a fellow front workhorse – I’d have been a bit miffed if someone who’d hidden the whole time had taken it, though I suppose that’s racing. Once the results are online I’ll stick a link on Facebook. According to Strava we averaged 23.6mph (in comparison to the men’s before us who had done 27!).

I enjoyed myself and will race again in the future. It was nice to chat to riders after who’d said I’d looked strong, been a solid wheel to follow and that I’d been welcome headwind relief including one racer “who didn’t even have to pedal behind you!” So that’s nice J

So there we go, blog over (plus I’ve finished my beef hula hoops now so I’d better do the gardening). I would just like to thank my Dad for cheering me on, and also Stevie Wonder, as I managed to have Superstition in my head for the whole damn race and never want to hear it ever again.

Sorry for the essay – it was a grab bag of hula hoops!