An off road weekend of ups and downs. And more ups.

The dates chosen for this year’s club off roader glamping weekend coincided with the ever popular Borderland Rotary Mountain Bike Challenge, so in democratic fashion I deferred my choice of the Scottish borders for the Welsh ones and last Friday evening eight of us arrived in Llangollen for the traditional MTBing triumvirate of eating too much food, not riding very many miles, (total for the weekend – about the same as a decent Sunday club run) and fixing broken bikes. 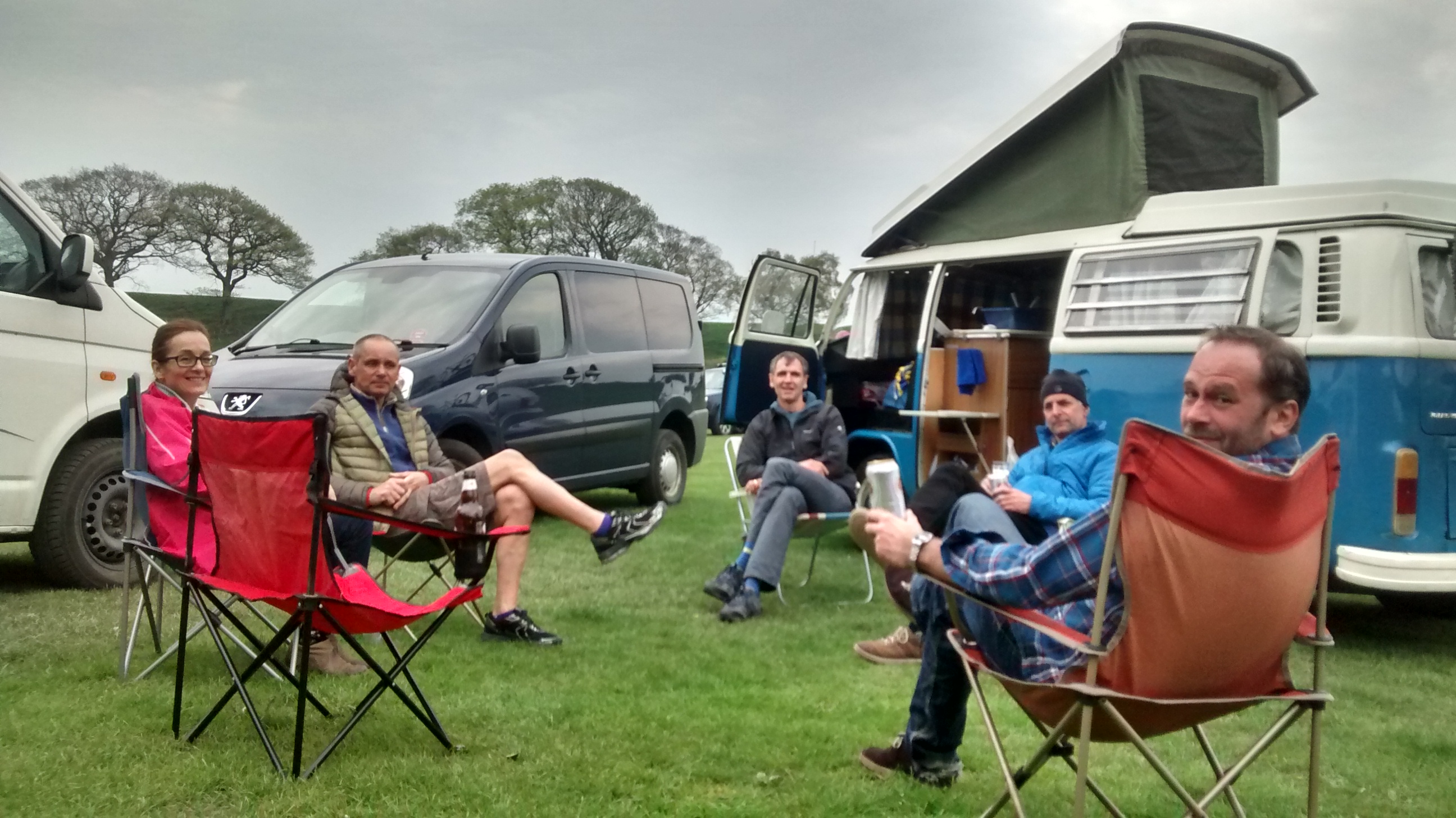 Initially I thought my planning had gone awry when the pub I chose for Friday’s meeting place had all the charm and ambience of a serial killers weekend retreat, (they must have a generous budget for fake Trip Advisor reviews) so we decamped to the Bridge End right next to the Llangollen Taxidermy Shop for food and drinks. That taxidermy place is weird, what would make anyone who was having a nice day out in such beautiful surroundings impulse buy a dead owl with a startled look?

Saturday was the day of the main event, and an early text from Tim Rutherford saying he’d be out for the day confirmed that none of us were going to claim the first Weaver Valley rider home bragging rights for the year, but even his blazing through the course at 1hr 50 wasn’t enough this year to be fastest rider home. 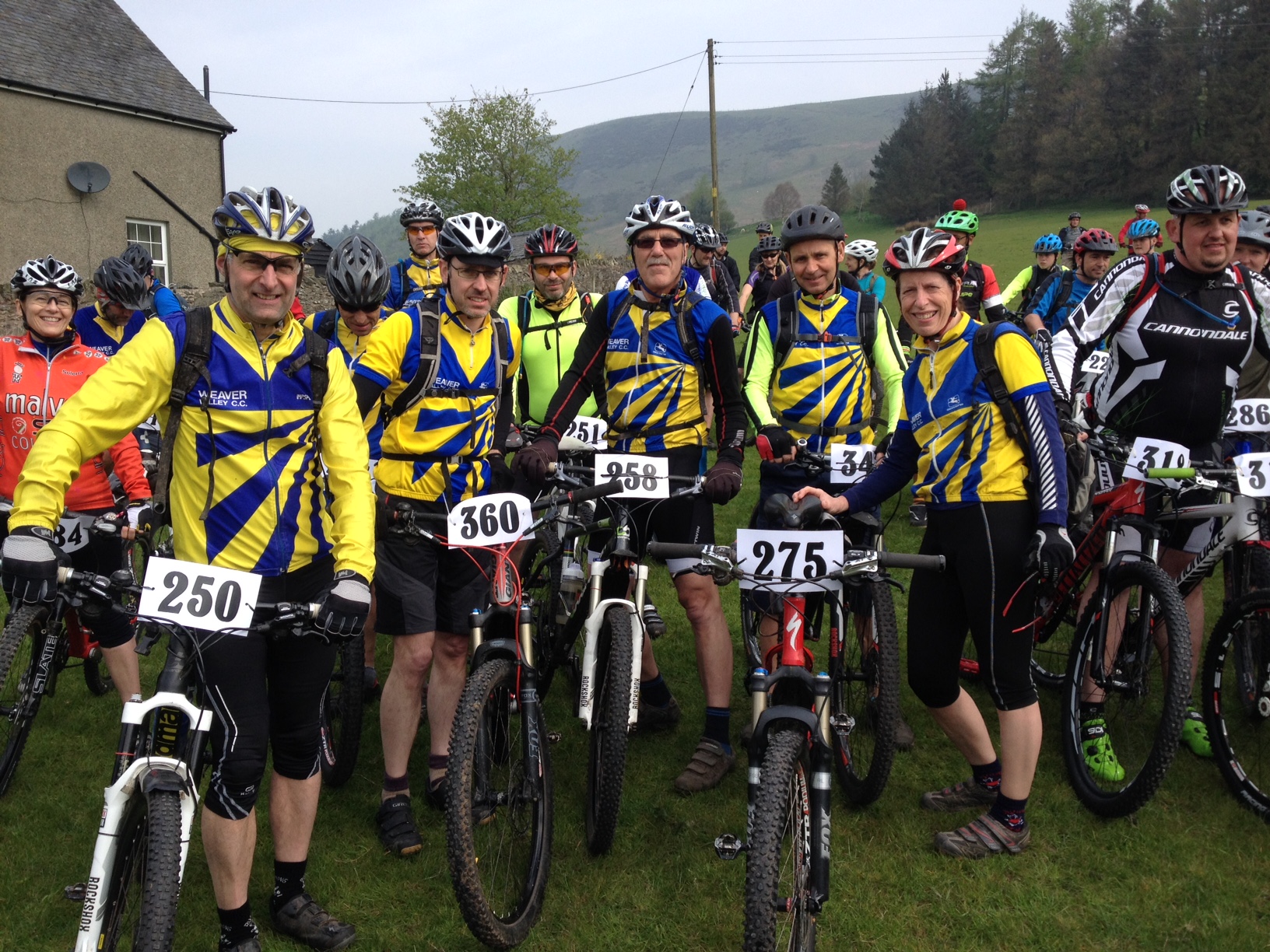 Ready for the off, your team. Ann, Tim, (not looking) Nick, Kev, (praying his bike will last this year, (spoiler – it didn’t)) Paul, Matt,  new rider Raoul, Steve, Geoff, Elenor.

We all arrived at the village hall in Rhiwlas in plenty of time to get registered, including Paul who decided that the 10 mile ride to the start would make a nice warm up, and shortly after 10 all watched Tim bugger off into the distance when we were flagged away as a team.

The route is a fairly challenging one, taking in 22 miles and about 2900 feet of climbing. Some of it is on private land, so it’s a ride heavy on the off road sections, (you can seen my Strava route here) with very little road linking bits. For most it was an uneventful trip with everyone  riding at their own pace, due to the excellent marshalling which is not our usual plan. For the second year on the trot, Kevan didn’t fall into the ‘most’ population, when his freehub failed at around half distance, forcing a DNS. It wasn’t a failure that could be repaired or bodged either by a bike shop or Nick, so that was pretty much the extent of his riding for the weekend done, but it did at least mean he could do some running training, so all was not lost. 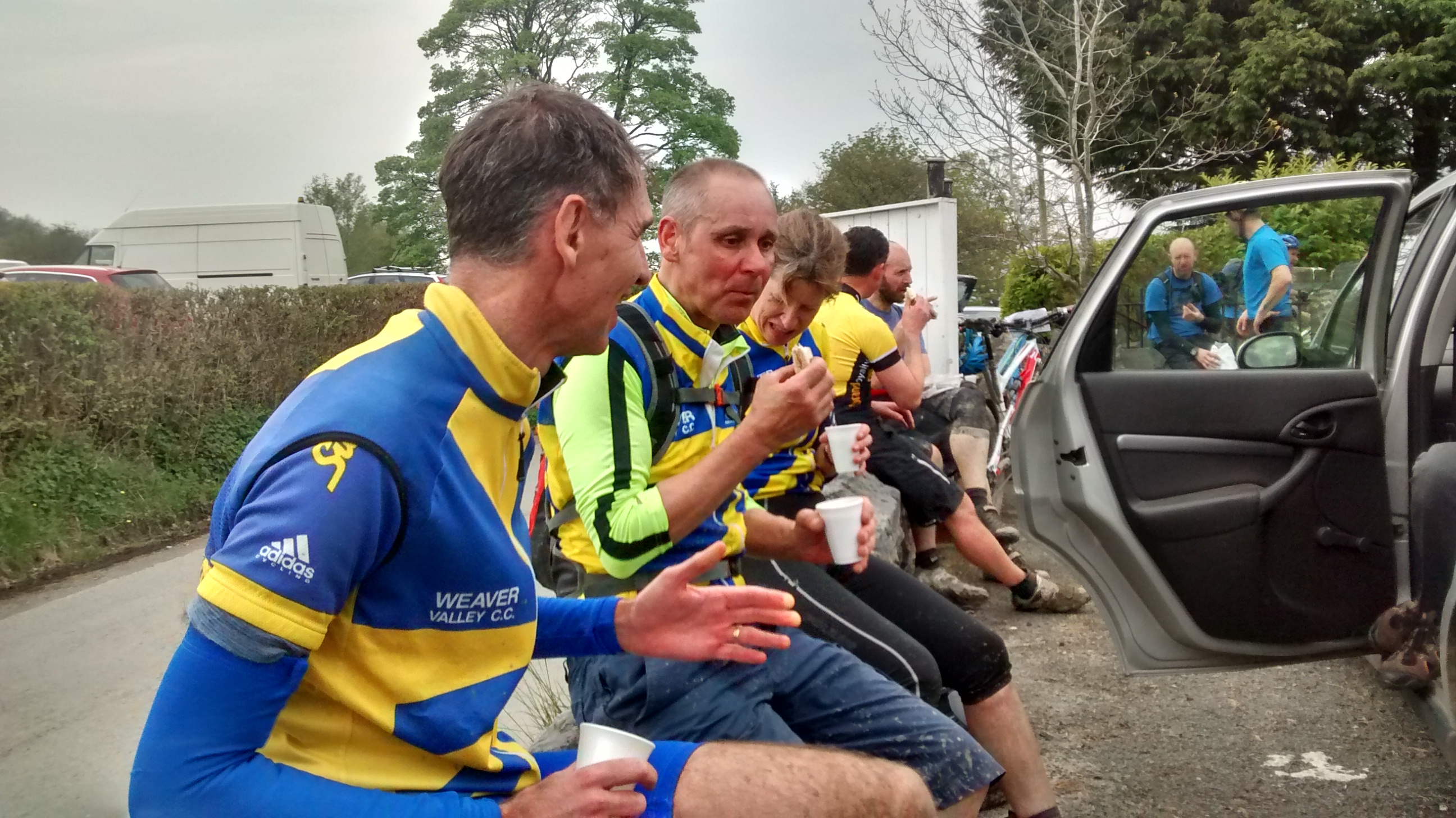 Your classic coffee/cake/cyclist combo at the end of the ride.

After we got back to Llangollen, (with Paul riding BACK again, this time accompanied by El as Kevan was off trying to buy bike bits in the car) some went for another 9 mile/1500ft ride, (you’ll notice that the climbing to distance ratio round here is pretty stiff) round the valley before it was time for tea and medals all round.

Sunday dawned wet and cloudy, but with the promise of sunshine and high temperatures later in the day we all set off with high spirits on a ride called ‘The Beast of Llangollen’. With hindsight, I should have considered the title a warning, and thought of an alternative. We started off up the same 1500ft climb from yesterday afternoon and by the time we arrived at the top Kevan’s bike had properly given up the ghost and Nick, Ann and Raoul decided to go their own way leaving Paul, Geoff, Elenor and me to tame the beast. 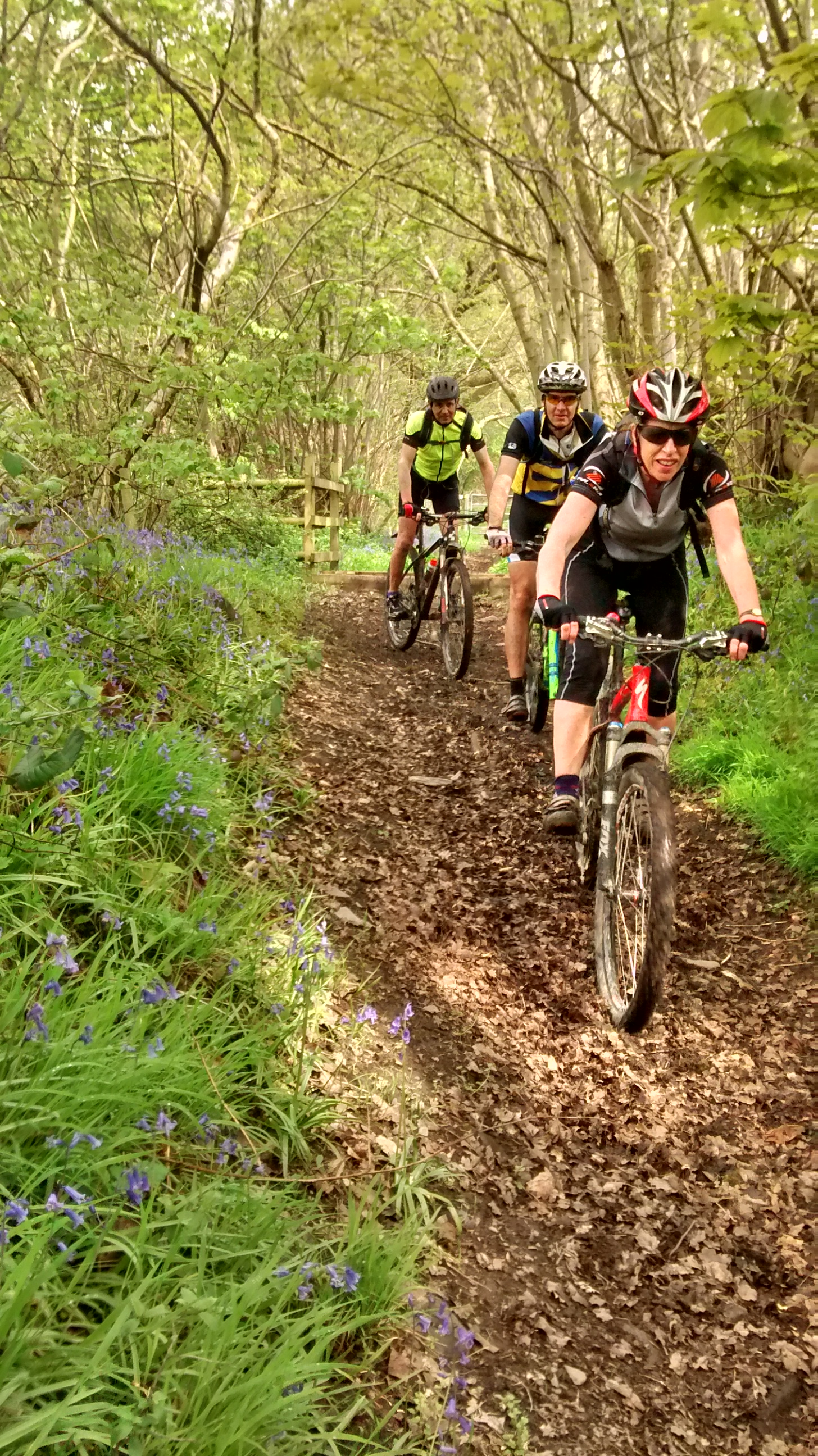 Bluebells on The Beast

And it sure lived upto it’s name!

Not much further than yesterday’s morning jaunt at 25 miles, but it was one of those routes that stitches together every single bit of tasty downhill by taking you from the base of one straight back up to the start of the next. Even though we missed out one of the climbs, the lure of a pub lunch at Glyn Ceriog was just too much, we still racked up nearly 4400 feet of uphill, all of which was pretty bleeding steep. Up and down. 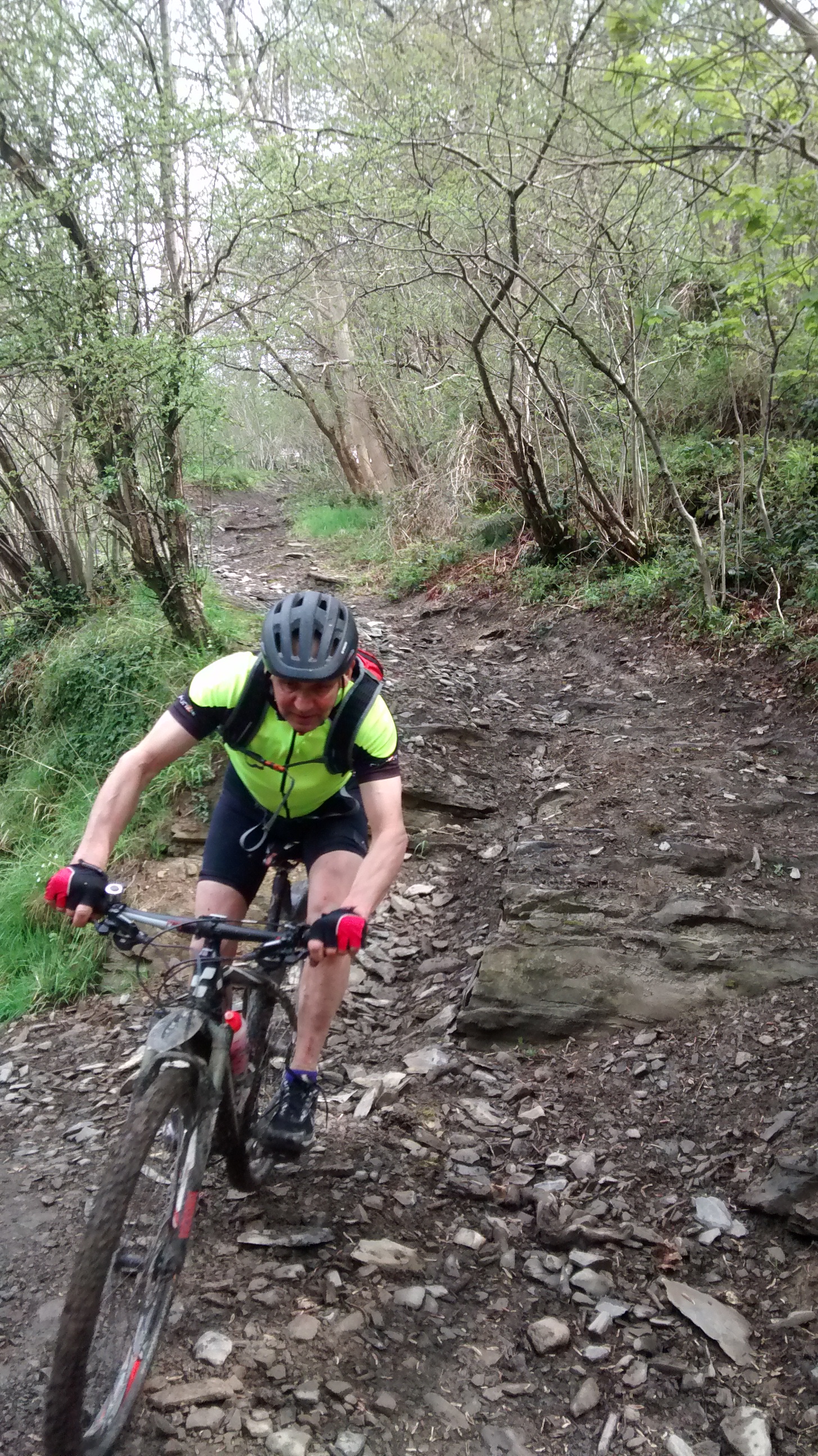