A trip to the Dog and Monkey.

No, it’s not a pub, (though a pre-Christmas pub lunch is on the cards for the final off road ride of the year, see the calendar) but the names of the two MTB trails at Cannock Chase forest. Follow the Dog and the Monkey Trail. It’s only just over an hour away but for some reason we don’t go very often, of the 6 of us that arrived last Saturday morning we worked out that it was about a year since any of us had boshed round these tracks.

And there’s been some major work put in by the trails crew since then. There used to be some quite long sections of forest fire roads linking up the singletrack fun bits, but not any longer. It’s all good now. There’s a lot of gradient packed in too, we did about 2800 feet of climbing in 22 miles. 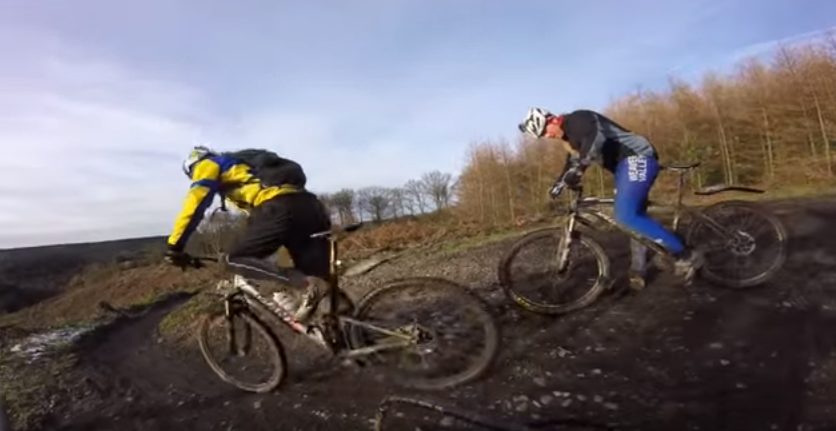 It wasn’t warm though. Our usual photographic experts didn’t risk taking their gloves off to take pictures, luckily Nick had his GoPro with him and took a video of the Lower Cliff section, (watch the whole thing here on YouTube) so we have a couple of screen grabs to see. This section is really smooth and fast now. It used to be quite rough and covered in trees, which I kind of liked and found the new open aspects a bit off putting on the first run. I was too busy glancing at the edges of the track thinking about how I could crash right down there if I got it wrong, which has got to be better than smacking into a tree really but the second circuit was much better when I knew what to expect. In fact for the whole day there were no large crashes, only Jamie really managed to fall off – on an uphill section none the less! To be fair to him, it was quite a tricky tight switchback section and he beat his self confessed average of 3 accidents by 2, so a definite improvement.

So there we have it, after a lap of each trail and a nice lunch we were back off up the M6, thinking how we won’t leave it so long to return in future.

Off Road
Round and round we go
Summer Kit!